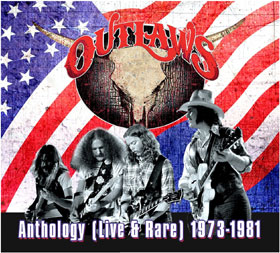 Southern rock is easily mocked: its notable qualities often include a reliance on three – count ’em, three – lead guitarists, a hopelessly macho worldview, and an unfortunate celebration of all things redneck. But reducing the genre to those qualities – true and accurate though they often are – results in an unfair dismissal of some mighty fine music. (Of course, you can go too far the other way, and take the stuff wholly without irony. The result of that is what they call modern country. No thanks.)

For every mega-popular Lynyrd Skynyrd, there were dozens of second-string acts plying a similar trade, and many of them were quite good at their chosen game. And while each of them seemed to feel the need to create their own Epic Track in the tradition of the inescapable “Free Bird,” – Blackfoot had “Highway Song,” for example – for my money the best of these has always been “Green Grass and High Tides” by The Outlaws.

In the long shadow of Skynyrd, The Outlaws never truly got their due. And they often cast a wider stylistic net than many of their peers: in 1979 they had the good taste to cover a song called “Miracle Man,” written by a then-not-too-well-known British musician calling himself Elvis Costello. And the best of their own self-penned numbers – “Green Grass” and “There Goes Another Love Song” plus “Hurry Sundown” – stood well alongside inspired covers like their reading of “Ghost Riders (In the Sky).”

One might not expect The Outlaws to get a 4CD rarities/retrospective treatment, but a new set called Anthology (Live & Rare) 1973-1981 more than justifies its own existence. Three discs of live material (concerts and in-studio radio broadcasts) capture the band at its most organic and straightforward, in a setting where no amount of studio polish could cover up any deficiencies. And there really aren’t many. The group makes a convincing argument that three guitarists isn’t in and of itself a capital crime as they tear through songs for throughout their catalog. Those discs are chronologically organized, and it’s interesting to note that – unlike so many bands’ anthologies – the quality doesn’t drop off a cliff as time progresses.

What’s funny is that the songs you might expect to show up the most, in fact show up infrequently. There’s only one(!) version of “Green Grass and High Tides,” from a 1976 concert. And there are no less than three versions of “Freeborn Man,” a song written by Paul Revere & the Raiders‘ Mark Lindsay and Keith Allison.

One of those versions is on the fourth disc, a collection of unreleased session tapes and demos. In total, these show that while The Outlaws perhaps aren’t the Great Lost Southern Rock Band, they nonetheless had a lot to offer, and exerted some positive influence on today’s brand of their style as reflected in the music of, say, Drive-by Truckers, Blackberry Smoke and a select few others.