I’m in the Fan Club: A Conversation with Jellyfish’s Roger Manning, Part One 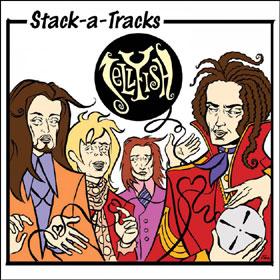 Jellyfish was one of the great bands of the early 90s. At a time when pop music had lost its way – or at least moved away from the things that made it such a culturally vital part of previous times (most notably the 70s), the Jellyfish approach celebrated the bombast and excess of rock/pop, aiming squarely at fun. But fun of a decidedly intelligent sort. While neither of the albums made a huge impact on the commercial marketplace, they were critical darlings (and, judging from available video, one hell of an exciting band to see live) and exerted great influence within a narrow scope.

Now, nearly twenty years after their final release, Jellyfish has released Stack-a-Tracks, instrumental versions of both of their studio albums. I spoke about it and more with Roger Manning, co-leader of Jellyfish (along with Andy Sturmer) throughout the band’s relatively brief tenure.

Bill Kopp: What was the motivation – or, put another way — who came up with the idea for releasing these Stack-a-Tracks tapes?

Roger Manning: To the best of my knowledge, it was Cheryl [Pawelski] at Omnivore. I didn’t even recall that these mixes existed. I understood that we had done “TV mixes” – most bands do – but I had no idea that they were sitting in a vault somewhere, ready to be made available. I was very happy that she had the foresight and the inspiration to realize this.

BK: I don’t have the NotLame Fan Club box set. Did any of the tracks on this new Stack-a-Tracks set appear on that collection?

RM: No. There are no instrumentals on that box set as far as I recall.

BK: I have spent countless hours with both Bellybutton and Spilt Milk. But I am hearing all sorts of things on Stack-a-Tracks, things I never knew were there. And you clearly haven’t heard these mixes in some twenty years. When you first re-listened to them in the run-up to release, what if anything surprised you?

RM: I don’t know as though there were any surprises, being as how I was one of the people there. [laughter] But I, too, had grown accustomed to listening to the songs as composites. The listener’s ear goes to the vocal first, and then the gaps get filled in with the instruments. Now with the vocals being gone, you’re free to hear all of the intricacies in production that we spent an inordinate amount of time with, and belabored over. So it was a joy to kind of hear the depth of what we were going for. I mean, I’ve worked on all kinds of productions, with other artists and different arranging. And we really had our work cut out for us; Andy [Sturmer] and myself really raised the bar as high as we could. And I look back on it fondly; I’m glad that we kind of got that out of our systems! [laughter] I’m very proud of it.