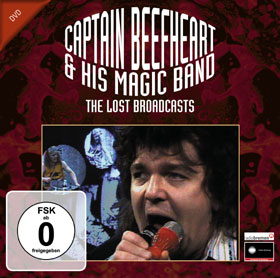 My music-loving friends (a redundant phrase, that) and I occasionally indulge in an old joke: whenever the subject of certain musical acts come up, one of us will mention how that artist is one whose work we keep on hand in case guests overstay their welcome. The point, of course, is that spinning of a disc by said artists generally moves guests to head for the door. And we oh-so-hip types, we get these artists; we actually enjoy that which is so (at best) alien or (at worst) painfully unlistenable about their music.

Two chief suspects on that list are The Residents and Captain Beefheart. Both virtually define the outsider aesthetic, though in very different ways. Beefheart’s work was based in blues, but imbued with a dada approach that headed off in all sorts of directions. His Trout Mask Replica is an important work, and this remains true whether or not you can stand to listen to it all the way through. Me, I bought it on the strength of a review I read as a young teen; it might have been the Rolling Stone Record Guide or some such. I picked it up on vinyl for a reasonable price; the records were technically used, but – as I discovered – “difficult” records can often be bought used, and the new owner will discovered the vinyl has barely been played. (The same thing happened when I finally scored a vinyl copy of John and Yoko‘s Two Virgins: the 40-plus year old vinyl is pristine. I mean, who plays that thing repeatedly?)

But Two Virgins isn’t of serious musical value; much of the recorded output of Captain Beefheart and His Magic Band, however, is.

An oft-repeated axiom (of repeated ’cause it’s true) is that Europeans have seemed to display a greater appreciation for American art than, well, Americans. One bit of evidence in favor of this argument is the existence of so many archival television clips of American artists. I can’t think of a single American TV appearance of Captain Beefheart, other than his late-period spot on Saturday Night Live. And to be fair, in his case, there aren’t all that many European spots, either.

But there is at least one, and it’s – up to now – pretty rare. Beefheart and Band recorded some numbers for the German musical variety show Beat Club. The sessions took place in April 1972, and a portion of the performance aired on German television that June. The entire recorded session never aired, but it’s available now on a DVD called The Lost Broadcasts. Running a mere 30 minutes, the unedited color reel finds Beefheart and his band on the soundstage running through two takes of “Click Clack” and three passes at “I’m Gonna Booglarize You Baby,” both featured on the band’s 1972 album The Spotlight Kid. One from Trout Mask Replica (“Steal Softly Thru the Snow”) and one from the then-unreleased Clear Spot (“Golden Birdies”) make up most of the disc’s remainder. The set opens with a three-minute Mark Boston bass solo (punctuated with brief Beefheart declamations) called “Mascara Snake.”

The band are decked out in gunge/glam finery, looking to all the world like The Mothers with a bigger wardrobe budget (in fact, bassist Roy Estrada, drummer Art Tripp III and guitarist Elliot Ingber were all past or future members of Frank Zappa‘s band. And guitarists Bill Harkleroad and Mark Boston had been with Beefheart since Trout Mask Replica. Tripp’s choice of headgear merits special notice.

“Click Clack” is a bizarre blues in which Tripp and Estrada hold down a tight, inssitent and primal beat, while the rest of the band seems (but only seems) to ignore them and play some other song. A wildly go-go-dancing Boston flails away on his guitar, and Beefheart wails his vocals and a terrific harmonica solo.

Estrada disappears from the stage for several takes; he’s not present for the proto-poetry-slam of “Golden Birdies,” in which Beefheart grasps (but does not play) a saxophone. Three takes of “I’m Gonna Booglarize You Baby” are all similar; all feature the one-chord riff with all manner of mayhem atop it. Beefheart gets annoyed with a stagehand, resulting in an aborted second take and a walk-off. The third take features the wacky and dated “psychedelic” visual effects for which Beat Club is fondly remembered. The instrumental “Steal Softly Thru the Snow” gives the Captain a chance to show off his avant garde jazzy (but not exactly jazz) stylings on the sax.

As a historical document, The Lost Broadcasts is essential viewing. As music, well, if you dig Beefheart, you’ll love it. And it’s always handy if your unwanted guests require audiovisual cues to be on their way.