Radio Birdman: Bird is the Word 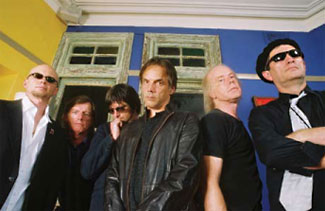 Some 32 years after bursting on the scene with the seminal Radios Appear, Radio Birdman has returned with Zeno Beach. Yet they deftly manage the trick of sounding fresh and new.

Intentionally or not, Radio Birdman made their name as one of Australia’s original punk outfits. Vocalist Rob Younger puts this into context: “Well, we always called it rock and roll when we started in ’74. Then when punk came in, the ‘punk’ label was affixed to us. And we were going, ‘well, we’ve always sounded like this, so, we’re not punks. We’re rock and roll.’ We did realize that being called punks did help us get gigs. So I didn’t go ’round places personally going, ‘I disavow all association with this rumor,’ or anything.”

It sounds corny, but it’s a calling.
–Rob Younger

For an Australian group, Radio Birdman gets pegged as a progenitor of the raw Detroit sound. “We paid a lot of lip service to the Detroit scene when we started out. In fact we did for years; we even dedicated our first album to The Stooges. I think we made our bed there, and we’re reluctant to lie in it. There’s a far wider range of influences in the band that’s always existed. But that’s never portrayed in print, despite my best endeavors.” In fact guitarist Deniz Tek is from Detroit, and actually bought his Epiphone guitar from Fred “Sonic” Smith of the legendary MC5. And while various members of Radio Birdman (including Younger) have played with an array of Detroit scenesters, Rob cites the Beatles and Rolling Stones as his biggest influences. 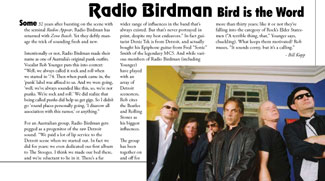 The group has been together on and off for more than thirty years; like it or not they’re falling into the category of Rock’s Elder Statesmen (“A terrible thing, that,” Younger says, chuckling). What keeps them motivated? Rob muses, “It sounds corny, but it’s a calling.”