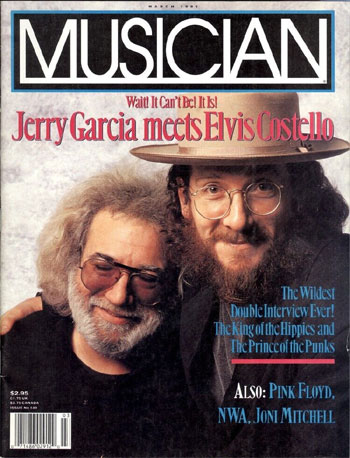 It’s quaint to think about it now, but when Elvis Costello surfaced in the summer of 1977 with My Aim is True, he was heralded as a punk artist. Coming on the scene alongside Sex Pistols, The Damned and The Clash, Costello’s status as a punk act might have made a kind of sense; he certainly didn’t fit into a musical world dominated by the likes of soft rockers Fleetwood Mac (Rumours) or the softer-still Barry Manilow. But with just a few years of hindsight, it became clear that the man born Declan MacManus would be better thought of as a member of that era’s new breed of thoughtful British songwriters, a group that would also include Graham Parker, Nick Lowe and perhaps even Bob Geldof.

And now, some 45 years after Costello’s debut, the two-time Grammy Award winner (and Rock and Roll Hall of Fame inductee) can be seen as part of an even more revered class of songwriters, alongside Lennon/McCartney, Difford/Tilbrook, Bruce Springsteen, and Bacharach/David. And stylistic classification ill-serves Costello, who in the years since his start has collaborated with artists across the musical landscape: Paul McCartney (rock/pop), The Brodsky Quartet (modern classical), Marian McPartland (jazz), The Roots (funk/r&b), T Bone Burnett (Americana) and many others.

Against that backdrop, the one-time so-called punk’s affinity for the music of The Grateful Dead should come as less than a shock. Costello has always found inspiration and fulfillment from the work of quality artists in eclectic places. In 1991, readers of Musician Magazine might have been surprised to find Costello sharing the cover photo with his pal Jerry Garcia.

As Costello revealed in that issue’s cover story, the music of the Dead was a long-time passion for him: “The real esoteric people were into West Coast bands… And I made almost this willful decision […], ‘Right, I’ll go further out now. Nobody will follow me to this one: the Grateful Dead’. [laughter] You know, this music almost nobody can dig.”

But he dug it, and would contribute his heartfelt medley of “Ship of Fools / It Must Have Been the Roses” to an all-star tribute, 2000’s Stolen Roses: Songs of the Grateful Dead. And his passion for Garcia and his band continues to this day: Costello recently assembled an evening’s worth of music to be presented as “Elvis Costello Sings Hunter Garcia,” a September 30 concert at the Great American Music Hall.

And while many think of Elvis Costello as the man who wrote concise, spiky rockers like “Pump it Up,” “Radio Radio” and “Oliver’s Army,” he – like Jerry Garcia – has roots in American acoustic forms like folk, country and bluegrass. That fact provides context for his appearance the day after the Hunter Garcia tribute, when he appeared (for something like the sixth time) at this year’s Hardly Strictly Bluegrass Festival in Golden Gate Park.

Yet as we approach these two very different Bay Area performances by Costello, maybe it’s worth reconsidering if he isn’t truly a punk after all. Because when you think about it, what’s truer to the punk aesthetic than charting a musical path that defiantly confounds those who would pigeonhole him as one thing or another? Costello’s passionate embrace of whatever far-flung musical traditions that speak to and resonate with him: those might be the punkiest qualities of all.