Note: I saw Nick Lowe twice in concert last week: once at Asheville’s Grey Eagle, doing a full (solo acoustic) set with Chuck Prophet opening; and again the next night as part of the three-night Yep Roc 15 celebration in Carrboro (Chapel Hill) NC. As a run-up to both of these events, I interviewed Lowe and wrote this feature, which originally appeared in Mountain Xpress. — bk

Nick Lowe has been known as many things: the Stiff Records producer who earned the nickname “basher;” an originator of pub-rock; a leading light of new wave; a hit songwriter; Johnny Cash’s son-in-law (for a time); and for the last couple of decades, a country-flavored singer-songwriter. It’s in that current guise that the English guitarist is bringing his solo show to Asheville October 10, the night before appearing at the three-day Yep Roc 15 festival/celebration in Carrboro NC. 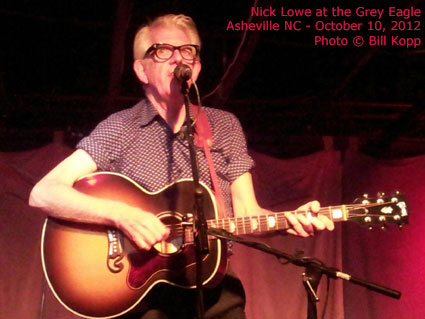 Lowe explains that country music has long been near to his heart. “My mother was pretty musical. She had a pretty good collection of records that I used to play all the time.” In addition to the most popular artists of the day, Lowe recalls that his mom “quite mysteriously – she couldn’t tell me how she had acquired these – had two ten-inch albums of music by Tennessee Ernie Ford.” Lowe describes Ford’s sound as “California country,” a sort of c&w “with a jazz element to it. And I just loved this stuff.”

“Like everyone of my generation I loved The Beatles, The Kinks, all those bands,” Lowe says. “But when I got older, I got more interested in where The Beatles got their influences from.” And that led Lowe toward country. “When I heard that stuff, there was no going back for me.” The enduring appeal of that American style of music would inform much of his work. While he was a mainstay of 70s pub rock (a sort of British version of country-rock, not unlike Poco) with Brinsley Schwarz, and then a key player in the British new wave scene (as both producer and performer) the acoustic-flavored country sounds were always there, sometimes just under the surface in his music. Even his most rocking songs – the hit (Billboard #12) single “Cruel to Be Kind” from his 1979 LP Labour of Lust, and his “(What’s So Funny ‘Bout) Peace, Love and Understanding,” later a hit for Elvis Costello and now regarded as a standard – were built on a subtle foundation of country music.

By the time punk and new wave hit in England, Lowe had established himself as “house producer” for Stiff, producing albums by Costello, Graham Parker, and many others. He also collaborated with like-minded roots-rocker Dave Edmunds (a producer in his own right) to form Rockpile. That group released only one album under its own name, but served as the backing group on a number of Lowe and Edmunds “solo” albums.

After the new wave era subsided, Nick Lowe’s music took a more overt turn in a c&w direction. Deftly blending rock, country and an ever-present helping of wry humor, Lowe went on to record a long string of solo albums. 2011’s The Old Magic is the fourteenth long-player under his own name. “I still love American music, and it’s obvious that I do,” Lowe says. “But I love what happens to it when it comes to this side of the Atlantic. We’re in a fabulous position here on this island, because we can choose the bits we want, like making a stew: ‘I’ll have a bit of New Orleans here.’”

Speaking of humor, Lowe admits that “I used to overdo it when I was starting out.” He may be thinking of his early solo singles “Bay City Rollers We Love You” and its sort of followup, “Rollers Show.” Or perhaps “Marie Provost” a jaunty tune from 1978’s Jesus of Cool about a woman who died at home only to have her corpse nibbled upon by her orphaned dachshund. (“I do like to shock a bit,” Lowe chuckles.) His goal – then and now – was to deflate the “serious and portentous” conventions of much of popular music, by writing lyrics that he describes as “cheeky.” While he insists he’s toned things down, solo numbers like “All Men Are Liars” (covered by Americana sensation Robert Ellis on the new various-artists collection Lowe Country: The Songs of Nick Lowe) and “I Trained Her to Love Me” show that Lowe’s wicked sense of humor remains sharp. “In order to get your theme across,” Lowe observes, “it seems to make the song a bit more poignant if you can put in a humorous, human element.” He’s happy when his music, as he puts it, “raises a wry smile” on the lips of the listener. “I’m actively engaged,” Lowe says, “in trying to bring back cheerful music. I’ve looked around, and I’ve decided that everyone’s writing stuff which is gloomy.” He laughs and adds, “Since the music business is in free fall at the moment, this is a project that will keep me busy.”