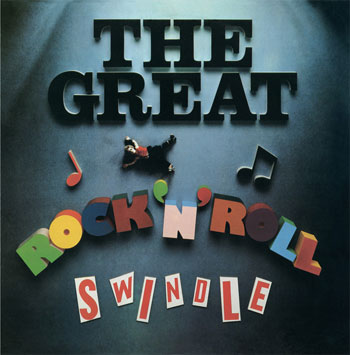 Regardless of how one felt (or feels) about them, the Sex Pistols affected a cultural revolution in music. They were neither the first nor the best punk rock group, but—for a time—they were the biggest. And though hearing their music today it has lost some of its ability to shock, when the band exploded onto the pop culture and music landscape, the Sex Pistols were every bit as outrageous as intended.

Of course the group imploded rather quickly, and the band’s time in the spotlight was comparatively brief. The body of work left behind is somewhat slim as well. Not counting bootlegged and semi-booted items like the Spunk demos and the infamous Chelmsford Top Security Prison gig (no, really), there are really only three albums’ worth of music from the band: the official album Never Mind the Bollocks, the collection of singles released (everywhere but the U.S.) as Flogging a Dead Horse and a soundtrack album, The Great Rock ‘n’ Roll Swindle. And there’s a fair amount of overlap of content among those three.

The Great Rock ‘n’ Roll Swindle was a film intended to be a kind of documentary of the Sex Pistols’ story, but it was one that very much reflected the perspective of the band’s self-styled Svengali Malcolm McLaren. So one-sided was it that many years later the band made a revisionist documentary of its own, The Filth and the Fury, in hope of setting the record straight. Complicating matters where Swindle was concerned, singer Johnny Rotten (neé Lydon) had left the group while the film was in production, so he’s largely (but not completely) absent. The manner in which his absence is dealt with is problematic, to say the least: the other band members were drafted on vocals, as was an on-the-lam train robber (again, and not for the last time: no, really).

There would be two different versions of the film soundtrack released on vinyl in 1979; the track listing is different for the U.S. and U.K. versions. For the purposes of this retrospective review of The Great Rock ‘n’ Roll Swindle, the original British 2LP version is at hand, so that’s what we’ll discuss.

The album opens with “The God Save the Queen Symphony.” It’s a deliberately over-the-top orchestral reading of the song, with a shamelessly over-emoting McLaren stage-whispering an introduction to the film. He lets listeners know that he invented punk rock, and spins a few other myths. In all, it may have worked on film, but as an album opener, it’s an inauspicious beginning.

With that four-minute track out of the way, the Sex Pistols make their first appearance.

The fact that the Sex Pistols played rock ‘n’ roll classics isn’t unusual, but it was (in a way) at odds with the band’s public persona as cultivated by McLaren. Recall if you will that the official (and false) story behind the sacking of original bassist Glen Matlock was that he had confessed to a liking of the Beatles. Of course the Pistols had always been steeped in rock and pop; Boyce and Hart’s “(I’m Not Your) Stepping Stone”—originally cut by Paul Revere and the Raiders, and a smash hit for the Monkees—was in the band’s set from early on. But we’re getting ahead of ourselves…

“Johnny B. Goode” is a studio outtake from 1976, with instrumental overdubs done much later after Rotten was gone. Rotten starts out singing the words, but the end of the first verse, he ad-libs, “I don’t know the words.” From there it’s largely off the rails, though the band pummels on relentlessly, holding it together reasonably well. After admitting, “Oh, fuck, it’s awful. The pits!” Rotten eventually gives up. After Steve Jones peels off a guitar solo, Rotten suggests to the rest of the band that they switch over to the Modern Lovers’ “Road Runner.” In fact he insists. They eventually relent, and then he laughs disarmingly and admits again, “I don’t know the words.” He asks for some help with the lyrics, and gets some. The song limps along competently enough, but in the end it sounds like what it is: a band jamming. Drummer Paul Cook does show that he’s a very solid timekeeper, though. The track ends with Rotten asking his band mates, “Do we know any other fucking songs that we could do?”

If one looks at the inside of the gatefold sleeve, the answer to that question would seem to be a reading of the Small Faces’ “Whatcha Gonna Do About It.” But that’s not what’s on this pressing of the album; a paper sheet slipped inside the jacket provides the actual track listing.

A bizarre and completely left-field track entitled “Black Arabs” is actually a reasonably well-done disco medley of Pistols classics, sort of a punk “Stars on 45.” It has no place on a Sex Pistols album, but for fans of Meco and Giorgio Moroder, it’s pretty vacant inventive. The arrangement does reinforce the argument that a great song stands up to reinterpretation in many styles.

A remixed recording of an outtake version of “Anarchy in the U.K.” closes Side One of the original UK 2LP release. The fidelity is a few notches down from the Never Mind the Bollocks version, and—if you can imagine it—it’s rawer and angrier. Without Chris Spedding’s guitar overdubs, it’s far punkier than the other recording as well.

Side Two opens with a blistering cover of The Who’s “Substitute.” Thanks to overdubs done after the musicians had improved their skills through touring, the instrumental component of the performance is pretty tight. Characteristically, Rotten knows some but not all of the words; he shouts along as best he can. His band mates do what they can to throw in harmony (sic) vocals.

“No Lip” (also known as “Don’t Give Me No Lip Child”) is a cover of a somewhat obscure 1964 b-side by Dave Berry, one the that era’s British teen idols. The original Stonesy rocker swings in that peculiarly English r&b style; the Pistols, of course, steamroll right over any nuance. Yet their cover is faithful to the original’s intent.