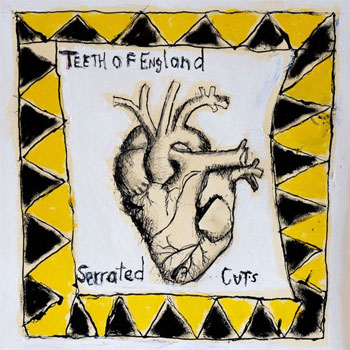 Dave Sinclair is a North Carolina musician, but he’s teamed up with Memphis players as Teeth of England. With a band that includes Bluff City mainstay Jack Oblivian on drums, Serrated Cuts is ten tracks of rough-and-ready rock’n’roll. If your tastes run toward early r’n’r crossed with an aesthetic familiar to fans of Like Flies on Sherbert and, say, Tav Falco’s Panther Burns, then this is for you. There’s a very tangible live-in-the-studio vibe throughout, and Sinclair’s vocals often sound like they’ve been run through a Green Bullet mic. Seth Moody is the invaluable utility man here, playing bass, keyboards, guitar and – most notably – honking saxophone.

The sound of Serrated Cuts suggests that making the record didn’t take a whole lot longer than it’ll take you to listen to it. Writing the songs probably took longer. Everyone involved sounds like they’re having fun making the thing, and that energy translates to this affably shambolic set of songs.