Album Review: Pepper Adams – Live at Room at the Top 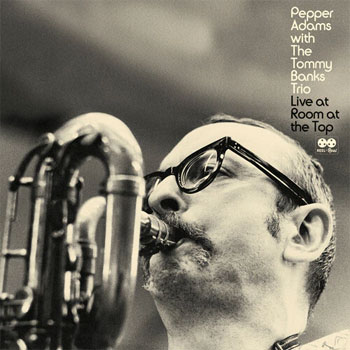 To date, my familiarity to the work of saxophonist and composer Pepper Adams has been minimal. I discovered and enjoyed a 2014 vinyl reissue of Bethlehem Records’ 1960 release Motor City Scene, featuring an uncredited Adams leading an all-star band through a lively set. And I dug his work on 1959’s Chet Baker’s Riverside album Chet Baker Plays the Best of Lerner & Lowe, reissued on CD in 2013. He’s also featured on the Thad Jones/Mel Lewis Orchestra archival release from Resonance Records, 2016’s All My Yesterdays.

But I didn’t realize that I had barely scratched the surface: Adams was a prolific composer, active band leader and highly in-demand session player, appearing on more than 600 recording sessions. Adams released nearly two dozen albums as a band leader.

And now there’s another. Thanks to Cory Weeds and his team at Reel to Real (the same label that brought us the sublime Cannonball Adderley archival set Swingin’ in Seattle, for which I was privileged to contribute a liner note essay), a new 2LP set will be released this Record Store Day (April 23). Live at Room at the Top is a previously-unreleased document of Adams with the Tommy Banks Trio, live in 1972.

For many years now, bootleg and/or otherwise unauthorized releases have proliferated among the worlds of jazz and rock. And even when rights and licensing are sorted out and those recordings receive legitimate release, the source tapes aren’t always available; the archivists work with the best material they can find. That might mean nth-generation tape dubs or even vinyl needle-drops.

But in the case of Live at Room at the Top, Weeds and his team were able to work from the original high fidelity tape reels. The Edmonton, Alberta venue offered good sound to begin with, and Adams’ accompanists this night – pianist Tommy Banks, bassist Bobby Cairns (a guitarist who depped on electric bass) and drummer Tom Doran all shine as they blow though a set of extended pieces. The four-sided set features only five tunes; only the brief set closer “’Tis” clocks in under 17 minutes.

Sonny Rollins’ “Oleo” gets an entire LP side, and it’s thrilling. The performances are rooted in melody, yet suitably exploratory. But what really makes this set special is the rarity of the material. Two Adams originals, “Civilization and Its Discontents” and “Patrice” are included – each filling a side of the record – and these are the only known extant live recordings of the compositions. “Patrice” would surface in a studio version on Adams’ 1974 album Ephemera, albeit in a significantly shorter form. And “Civilization” appeared on a Bill Perkins LP on which Adams was second-billed, 1980’s Confluence; it, too is much shorter on the studio version.

Three essays and an interview with Marc Vasey (producer of the original recording) are included on a glossy insert along with some great photos. The vinyl pressing and packaging are to a high standard. Whether one is a Pepper aficionado or (like me) comparatively new to his work. Live at Room at the Top is highly recommended.