In my occasional series of capsule reviews, I arbitrarily limit myself to a specific word-count; as much as anything else, it’s to keep the editor in me amused. Anyway, today I take a look at four jazz reissues and one archival jazz release, each in the space of 150 words. 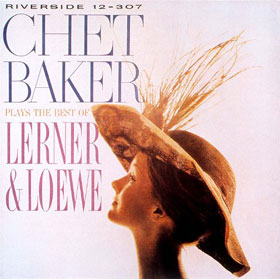 Chet Baker – Plays the Best of Lerner & Loewe (Concord/Riverside)
Some jazz is supremely accessible, delightfully tuneful. While maintaining the improvisational characteristics that are such an integral part of the form, it builds upon melodies that are warmly familiar. The result is exploration grounded in familiarity. That’s the approach taken on Chet Baker Plays the Best of Lerner & Loewe. This 1959 Riverside release – newly reissued on Concord’s Original Jazz Classics imprint – presents Baker’s trumpet leading Herbie Mann, Zoot Sims, Bill Evans and others through a songbook of much-loved show tunes. Four of the eight tracks are from My Fair Lady, with the others from other staggeringly popular shows of the era (Brigadoon, Gigi and Paint Your Wagon). The readings are gentle and sentimental, yet never insipid nor boring. Avoiding falling into the easy listening trap, Evans, Mann, Sims and Pepper Adams‘ work (the latter on baritone sax) keep listeners from letting this album become mere background music. 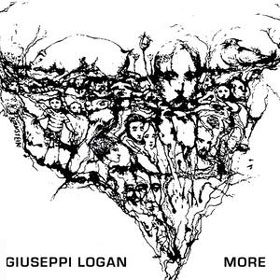 Giuseppi Logan – More (ESP-Disk)
Some jazz is inaccessible. It virtually laughs in the faces of convention and melody, daring the listener to give up on it. Enjoying – or at least appreciating this sort of jazz – demands much of the listener. Preconceptions are extremely unhelpful; the music simply isn’t designed for following along. It’s often meant to be experienced on a visceral level as opposed to an intellectual one. That’s a reasonable description of More, the ESP-Disk 1965 album from Giuseppi Logan. On this four-track album (including ten previously unreleased minutes of “Shebar” that more than double the song’s length), Logan alternates between alto sax, bass clarinet, flute and piano, ably (but bizarrely and often atonally) assisted by Don Pullen on piano, Milford Graves on drums, and Eddie Gomez (of Bill Evans Trio fame) or Reggie Johnson on bass. More is fascinating but certainly not for the faint of heart or conventionally-minded. 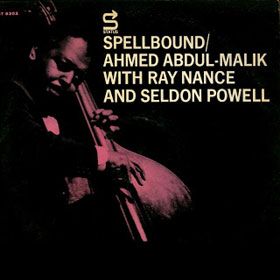 Ahmed Abdul-Malik with Ray Nance and Seldon Powell – Spellbound (Real Gone Music)
The 1960s were a boundary-pushing era for rock’n’roll, but the same was true for jazz. Toward the end of the decade, soul jazz, early fusion and other forms began to take hold; styles that boldly stepped outside any ideas of narrow convention. In the mid 60s, some jazz artists looked for ways to expand the genre’s reach, as Brazilian influence had done a decade earlier. One exponent of this effort was Ahmed Abdul-Malik‘s Spellbound, credited to the bassist plus Ray Nance (cornet and violin, though the latter has more of a gypsy fiddle feel here) and Seldon Powell (tenor sax and flute). Spellbound successfully melds Eastern Mediterranean and Middle Eastern flavors into the jazz idiom. Hamza Aldeen‘s oud is applied to great effect on a poppish cover of the movie theme “Never on Sunday.” It might remind casual jazz fans of Anton Karas‘ 1949 smash “Third Man Theme.” 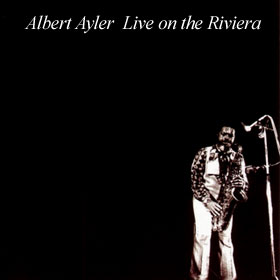 Albert Ayler – Live on the Riviera (ESP-Disk)
Ayler‘s name is commonly-used shorthand for a sort of avant-garde jazz that shares its aesthetic (though of course not its sound) with beat poetry and rock’n’roll. In 1970 the tenor saxophonist fronted a trio (Allen Blairman on drums and double bassist Steve Tintweiss) plus vocalist/saxophonist Mary Maria on a wild live set on stage in Italy. That honking, squawking set was released later that year as Live on the Riviera, and as part of its 50th Anniversary Remastered Editions series, ESP-Disk has reissued the set on CD. Some reviewers ding the set for the spoken-word antics of Maria, but to this listener that only adds to the charm, much like Rick Holmes did on Nat Adderley‘s Soul Zodiac. (Whether the Venetian audience understood her goings-on about music’s universal healing power remains open to speculation). Elsewhere (as on “Birth of Mirth”) Maria’s vocal acrobatics recall a more jazz-leaning Yoko Ono. 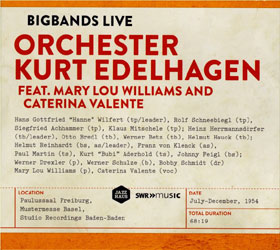 Orchester Kurt Edelhagen – Big Bands Live (Jazzhaus)
As the liner notes of this release explain, in the mid 1950s Germany was trying to live down its recent past. Big band jazz was one of the more popular diversions of the era. And while Germany would be host to many American jazz and big band artists (for proof, merely witness the archival riches coming out of Jazzhaus these last few years), homegrown artists had plenty to offer as well. Legendary taskmaster/bandleader Kurt Edelhagen led a roughly eighteen-piece jazz orchestra through many studio and live/radio performances. Eighteen of these are collected on this, the latest in Jazzhaus’ Big Bands Live series. The material leans toward standard and well-known numbers (“Tuxedo Junction,” George Gershwin‘s “The Man I Love,” “Pennies from Heaven”) but all are delivered with precision and verve. The remastered monaural recordings are of that typically peerless German quality; you’ll never miss the lack of stereo separation.