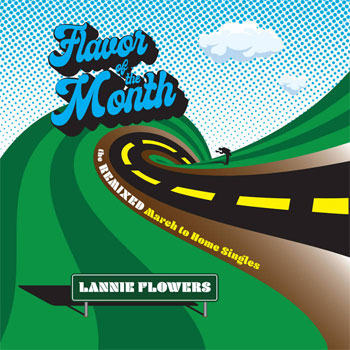 Texas singer, songwriter and guitarist Lannie Flowers is a giant in the power pop subgenre. His body of work showcases chiming, hooky and melodic songs with an immediate, relatable character. His 2019 release, Home took things in a slightly different direction, leaning in more of an acoustic/Americana style. Though widely acclaimed, Home remained something of an outlier. How he’s back with Flavor of the Month, a record that effectively reconciles the differences between Home and his earlier work.

Flavor of the Month has the accessibility and hookiness of classic Flowers, but it’s a subtly more mature record. The songs employ even more metaphorical shade and light than before; Flowers has expanded is already considerable musical palette to include a wider variety of styles.

And those styles aren’t used in a musical travelogue way; no, they’re merely the tools Flowers uses to get his musical ideas across. Think of the subtle keyboard and backing voices on the Revolver-esque “Lost in a Daydream” as a fistful of paintbrushes; Flowers uses the components as a means to an end.

“Summer Blue” leaps out of the speakers with passion, exuberance and an uplifting vibe that wraps itself around the listener’s cerebral cortex. The insistent rhythm section (drummer Scott Trammell and bassist Pat Buchanan) has the perfect feel and character for Flowers’ songs; the three musicians plays in a way that suggests they’re communicating on a level the rest of us can’t being to understand.

Quieter numbers like “Let it Go” still have a rock sensibility, and serve to emphasize the strength and variety of Flowers’ songwriting. And that track’s vocal harmonies might lead the listener to think of Crosby, Stills and Nash. But then Flowers shifts gears back to breezy, impassioned rockers like “Where Did All the Fun Go?” a tune that wouldn’t have been out of place on Circles or Same Old Story.

The catchy songcraft that made 2010’s Circles an essential part of any melodic rock fan’s collection is all over the new record. The product of pandemic-era series of digital releases, Flavor of the Month nonetheless sounds and feels like what it is: a cohesive album.