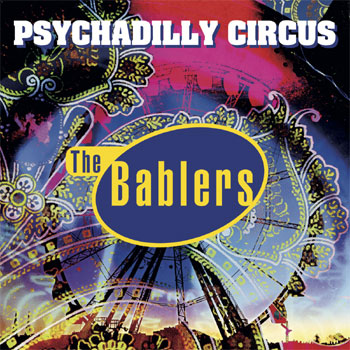 My copies of Imagine and Mind Games are on vinyl, so I knew I hadn’t mistakenly loaded one of them into my CD player. But the cognitive dissonance remained as I absorbed “Love is Everything,” the opening track on The Bablers’ Psychadilly Circus. Imagine a non-satirical rethink of National Lampoon’s “Magical Misery Tour” and you’ll have some sense of the song’s vibe.

The Bablers are from Finland, a country that continues to surprise me (see also: Micke Bjorklof). Led by Arto Tamminen, the group conjures the feel of early ‘70s Lennon. But it does more than that. The stomping title track has a character closer to glam-era T. Rex, albeit with treated vocals. As its title none-too-subtly telegraphs, “Queen of Yesterday” will make every listener think of Paul McCartney, straddling his Sgt. Pepper style with the approach Wings used circa Venus and Mars.

It’s fun to play spot-the-influences with this album. If Wings released “I Hope it Wouldn’t Rain Tomorrow” right after “Juniors Farm,” fans would’ve lapped it up. “All Because of You” is Johnny Moondog again. “Unidentified” is London Town era Paul. The pastoral White Album McCartney informs “Where Were You My Friend.”

And on it goes, with original tunes that distill the essence of yesteryear while never ever ripping off the sources of their inspiration. As its title hints, “Some Tears” feels like Plastic Ono Band Lennon, with a bit of Flux Fiddlers fiddling in the background. “Angry Young Man” recalls “Maxwell’s Silver Hammer.” “Love to Live” feels like a Mind Games outtake with George lending a hand on slide guitar, and Band on the Run-era Paul on harmonies.

Shall I continue? “Walking on a Sunny Beach” is more mid-’70s Paul, circa Speed of Sound. “Child of War,” check with White Album John. The jangling “When You Were Growing” reaches back to Revolver and Rubber Soul for its inspiration. “Singing with the Bluebird,” I don’t have you tell you from where that one draws. A remix of the opening track concludes the album.

As an exercise in creating original music using someone else’s signature arrangement and melody ideas, Psychadilly Circus is an unqualified success. But it’s every bit as successful as a standalone musical experience. It’ll make Beatles fans smile, while making them Bablers fans in the process. Bravo.