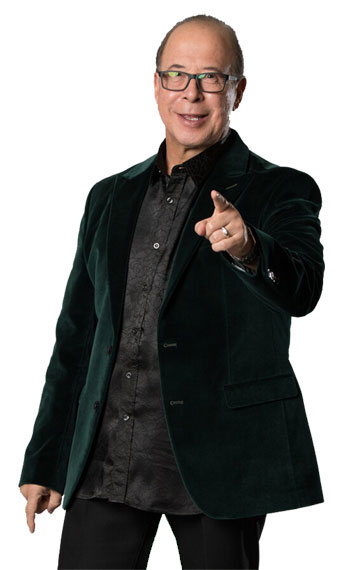 For more than 50 years, Tower of Power has been bringing its soulful brand of funk to hit records and energetic live shows. In 2018 the nine-man band – plus guest/alumni singers and players and a full string section – returned to where it all began: Oakland, California. There they played a two-night concert celebration, documented on a new album and DVD, 50 Years of Funk & Soul. Band leader and saxophonist Emilio “Mimi” Castillo runs down ten landmark records from his personal collection.

The Platters, The Platters
That’s one of the first records in my remembrance, when I was a little kid. My mother said that at six years old, I would be sitting on the toilet singing “Only You,” verbatim. I just loved the Platters.

Bill Doggett, Everybody Dance the Honky Tonk
My father was a bartender in Detroit, and my parents were nightlife people. They had Black friends. My dad dug people like Sarah Vaughan, Ella Fitzgerald and Dinah Washington; I was exposed to all that as a kid. I remember seeing my parents dancing in the living room when they brought that Bill Doggett record home. I loved the saxophone, and I thought the record was hopping!

Nat King Cole, Unforgettable
Once again, it was an album that my parents had. My dad loved singers; I guess that’s where I get it from. People ask me, “Who’s your favorite sax player?” I say, “It’s not really my thing. My thing is singers; it always has been.” And Nat King Cole is one of the finest. I love songs: great lyrics and great melodies. Those songs by Nat King Cole were phenomenal.

Booker T &the M.G.’s, Green Onions
Green Onions is the first album that I bought. You just heard it, and it was like, “Man, that’s cool!” After I bought it, we had a party. Kids came over to my house, and we were all dancing in the back yard by the pool. Years later, [guitarist] Steve Cropper produced Tower of Power’s second album, Bump City, uncredited. He also produced 1978’s We Came to Play!

Otis Redding, In Person At The Whisky a Go Go
That album is pure energy: listen to “I Can’t Turn You Loose” and your heart will race. We played rock ‘n’ roll when we were teenagers, but by the time I was 16 and I heard this record, I discovered what I wanted to do as a band: soul music.

Sam & Dave, Double Dynamite
I remember I went to see Sam & Dave at Basin Street West in San Francisco when I was 16; I was right up front. They had a 13-piece band. When they did “When Something Is Wrong With My Baby,” they did it so slow that you could fly to Tokyo and back between the two and the four. It was unbelievable. I think this record changed a lot of people’s lives.

The 5th Dimension, The Magic Garden
This is one of the greatest albums ever made. Jimmy Webb wrote most of the songs. Right when Stephen “Doc” Kupka and I started writing, he turned me on to that record. He had a background in Broadway show music; I had never listened to that stuff. We listened to the entire album over and over.

The Impressions, This is My Country
That album has a song called “My Woman’s Love,” and it has a really high, beautiful trumpet intro. We loved it. Doc had come to me and said, “What we’re doing with other people’s songs is amazing, but why don’t we write our own?” I said, “We can try that, but we’ll have to write a trumpet intro like Curtis Mayfield’s “My Woman’s Love.” That’s how we started “You’re Still a Young Man,” the first song we ever wrote.

Ray Charles, A Portrait of Ray
That’s an album of all ballads. One day many, many years ago, I put the album on. My girls – who were eight and four – asked their mom, “What’s the matter with Dad? He keeps listing to that sad record!” It’s so moody; I love it.

You may also enjoy: My 2021 interview with Castillo and Dave Garibaldi  and My 2014 review of a live Tower of Power radio broadcast recorded in 1974.