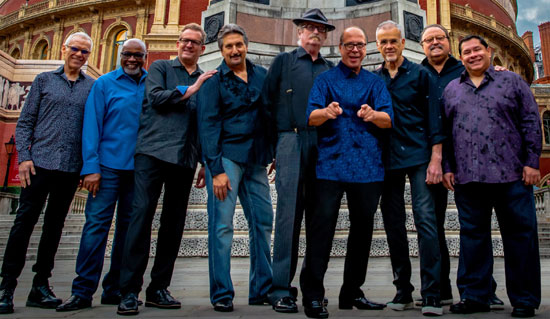 When Emilio “Mimi” Castillo launched Tower of Power with fellow sax player Stephen “Doc” Kupka, he never imagined that the Oakland-born soul-funk-r&b group would still be going strong 50 years later. And while members of the lively outfit have come and gone – more than 60 musicians have passed through its ranks – Tower of Power celebrated its 50th anniversary in June 2018 with a pair of shows at Oakland’s Fox Theater. And those performances – featuring the current band plus a breathtaking string section and a bevy of returning T.O.P. alumni – are documented on a new release. 50 Years of Funk & Soul was released March 26 in multiple formats including vinyl, CD and DVD.

Founding members Castillo and Kupka are at the core of the nine-man lineup, along with drummer Dave Garibaldi, who first joined Tower of Power in July 1970. In the group’s early years – documented on albums like their 1970 debut East Bay Grease, 1972’ Bump City and their eventual Gold-selling self-titled LP from 1973 – some people didn’t know quite what to make of the band.

“I think they’ve always had a hard time figuring us out,” laughs Castillo. “Even when horn bands became popular, we had a different sound and a different approach to songwriting. It was hard to put us in a box, and that was a challenge for the industry.” Tower of Power stood apart from the San Francisco psychedelic sound exemplified by the Jefferson Airplane and the Grateful Dead. “It took a while for people to figure it out,” agrees Garibaldi. But in the Bay Area, it didn’t take long at all, because it was a hotbed of all the music that was happening.

Castillo gives much credit to Bill Graham for helping to expose the horn-centric band to a wider audience. “It all happened because of Bill Graham,” he insists. “If he hadn’t signed us, I doubt whether we’d even be talking right now. I’m serious.” He recalls Tower of Power’s audition for Graham at the storied Fillmore West. “Right after the gig, I told the other guys, ‘I’m flying back to Detroit to go spend the holidays with my family. If nothing happens with this, I’m not coming back.’” He emphasizes that he fully expected not to return.

“Three days later,” Castillo says with a smile, “Doc called. He said, ‘You gotta come back!’” Graham wanted to sign Tower of Power to his newly-launched Fillmore Records. Thanks to a distribution deal with industry giant Atlantic Records, East Bay Grease made it to the ears of a nationwide listener base.

But Tower of Power was different from the prevailing styles. And that meant that when they embarked upon their first national tour – with fellow hometown heroes Creedence Clearwater Revival – it was an uphill battle in some markets.

Garibaldi laughs as he tells the story of a gig in Louisiana. “It was 1971, something like that,” he says. As the opening act, Tower of Power was playing the Shreveport Coliseum. The house lights were still on as concertgoers filled the venue. “People were throwing stuff at us,” he says. “They were throwing Coke cans – full ones, actually – at the band while we were playing! So, that should tell you right there what kind of acceptance we were getting. It wasn’t that way everywhere, but that particular instance was pretty dramatic.”

Things got better quickly. Between 1972 and 1979, Tower of Power landed three of its singles – “You’re Still a Young Man,” “So Very Hard to Go” and “Don’t Change Horses (In the Middle of a Stream)” – on the Top 40 pop charts. The band scored twice as many Top 40 singles on the R&B chart of that era, with seven other singles making it into the lower reaches of that chart. And though it took several years to be certified, 1973’s Tower of Power – featuring the crowd favorite “What is Hip?” earned a Gold Award (500,000 units sold in the United States). “We didn’t get that until many, many years later,” Castillo says. He believes that 1974’s Back to Oakland sold at least as well, but it hasn’t been certified.

To date, the group has released 20 studio albums of new material, and 50 Years of Funk & Soul is their seventh live album. Throughout the 1970s and beyond, the best way to experience Tower of Power has always been to see and hear them live onstage. But the costs associated with touring a large band and crew meant that the band didn’t find financial success on the level of many other popular touring acts. Garibaldi characterizes Tower of Power this way: “Great live band, cool songs, and all that stuff, but not a commercial enterprise by any means, because we always did things kind of the way we wanted to do it. Our focus was just on making our music.”

And that focus is at the core of the new 50 Years of Funk & Soul set. Augmented by strings and joined by former members Chester Thompson, Lenny Pickett, Bruce Conte and Ray Greene, Tower of Power tears through 22 songs, selected from across their deep catalog.

Asked to pinpoint his band’s most notable defining characteristic, Castillo offers a perhaps unexpected answer. Allowing that the five-piece horn section would seem to be the band’s special ingredient, he instead says that it’s Tower of Power’s rhythm section that sets the group apart. “We approach rhythm differently,” he says. “Syncopating the rhythm affects what we do with the horns, what we do with the background vocals, and even how the lead singer sings. That’s what separates us from the other bands, and that’s why it was so hard for people to put us in a box, because we didn’t have that old ‘woodchopper’ drummer.”

Today, only a few of Tower of Power’s musicians still live in Oakland. But Castillo believes the city’s character is still present in the band’s music. “The soul that came out of Memphis and Muscle Shoals had that sort of Southern, country feel,” he says. Oakland soul is more urban. It’s blue collar, and it’s down to Earth.” And that describes Tower of Power as well as anything.