Continued from Part Three. In this final part of my lively conversation with Chris Brubeck, he relates a funny story about an album he made many, many years ago with Larry Coryell. 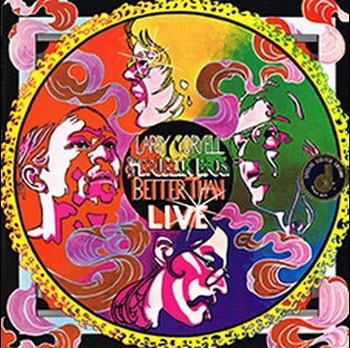 Again another tangent: I was just listening to a vinyl LP that I bought years ago called Better Than Live by Larry Coryell and the Brubeck Brothers. It’s got some high-energy fusion on it. Actually, I interviewed Larry several times before his untimely passing. And I actually got to write the liner notes for the first-ever CD reissues of some of his albums. I realize that that record was made more than 40 years ago, but do you still have an affinity for that kind of hybrid of rock/jazz thing that you were doing back then?

Well, first of all, it’s hard to believe that it’s that old. Since you know that record, I can’t remember if it’s it’s discussed in the liner notes or not, but there’s one tune on there, “Midnight Sailor.” Darius [Brubeck] wrote it. And it’s kind of a groove tune.

Now, these were just direct to disc recordings. So, as that little experiment got more and more popular, they got to the point that instead of just cutting one disc which was able to print maybe 20,000, they started cutting multiple lathes by hooking into different studios.

Oh, that’s how they did it? I didn’t realize that.

Yeah. So, they had cables running across alleys to go to different places where the lathes would be cutting, and when we cut those records, we not only did the tune live, we had to do the entire side live.

Right. You had to do the whole 20 minutes. We were going, and we’re, like, in the seventeenth minute, which means maybe the third or fourth song on the side, and a police car got a call of, like, a robbery in a 7-11 and came racing down the alley, and when the guys talking, “All right, we have a 9-4-4 and 1-1.” That came through the wires, broadcasting out of the radio into the lathes and ruined the side. And they’re like, “Sorry, guys. We’re going to have to start again.” And it was like, “Ah, shit.” Because we had played really good. So, we had to take a break and they had to reset all the lathe and everything.

So, Larry drank a beer; I think it was a Heineken. And like 20 minutes later, it’s “Okay, let’s try to do this again.” We start recording, and something went wrong technically. We got half way through: “Oh guys, we got to start again.” So, this is like a Catskills joke, or something.

So, it happened four different times. Each time, Larry would have another beer. So, by the time we got to the last attempt, I was really worried about what kind of state he was in, alcoholically speaking. And we got to the big guitar solo in “Midnight Sailor,” which was the last cut on that side, and I look over and I hear this amazing stuff that had never happened before, like a slide guitar sound, sort of a Derek Trucks kind of thing, except Derek wasn’t born yet.

And then I look over, Larry has drunk so much that he’s using his Heineken bottle as a steel bar on the guitar. And that is the solo that you hear on that record. That’s the side. It was really cool. It was good.