Continued from Part One. In this segment of my conversation with Chris Brubeck, he reflects on what he learned from his famous father, and his rather unusual choice of instrument.

What would you say are some of the most important musical values that you learned from your father?

I think, like for me, it’s kind of interesting to keep track. I was so fortunate to be able to hear some of the greatest jazz musicians of the day, just around the house all the time. And of course, you only know what you know when you’re little. So, it was like, Uncle John Morello and Uncle Paul Desmond. I didn’t know that Uncle Joe Morello is Joe Morello. [I didn’t know] the big debate was, “Who is the best drummer in the world? Is it Buddy Rich or Joe Morello?”

And Paul Desmond, one of the great sax players … I would hear these guys. And I loved their music. I would literally crawl under the piano to listen to them rehearse. And as we grew up, we were very lucky to go from just babies to rug rats to people that started to learn how to play instruments to people that would sometimes jam with those guys to finally sharing the stage with them and being on tour.

You know, I’m never going to say that I’m as great as Eugene Wright, but we used to perform together. We went from infancy and non-music, and just a dream of becoming musicians, to sharing the stage together. So, that was an incredibly beautiful life. You know? To be little caterpillars, crawling around the floor and turn into butterflies eventually. That was a cool thing.

Dave, for example, started Fantasy Records, which went on to be a big deal. The reason he started Fantasy Records is because every other record company he tried to be with said, “Oh, you’re out of your mind. Your music is too far out. It’s never going to work. Who wants to listen to that? Go away. Do something else.” You know?

So, in desperation he started Fantasy Records with two guys whose father owned a pressing plant. Dave’s life is filled with these different miracles, and I sometimes laugh because now we have that in our cultural vocabulary – not that he was stupid by any means – but he certainly had a Forrest Gump kind of life.

His partners screwed him out of his own record company that the three of them started, but when he got screwed and suddenly had no record company, he was really lucky. Because a very famous jazz producer named George Avakian – who worked with John Hammond and Columbia Records – had heard of Dave and saw his reviews, and had heard his records, and said, “Dave, you know, I heard you just got screwed. You want to join Columbia Records?” Which was the biggest distribution system in the world.

It was like if you invented something for a computer program and your partner screwed you, but Apple said, “Well, we’re going to put it in every Mac.” You know what I mean? It was a huge blessing that he got screwed, ultimately. In terms of people hearing him from all over the world.

So, to follow your dreams and believe in yourself, and invest in yourself. And it’s cool to march to the beat of a different drummer. That’s what I think I learned from my dad. 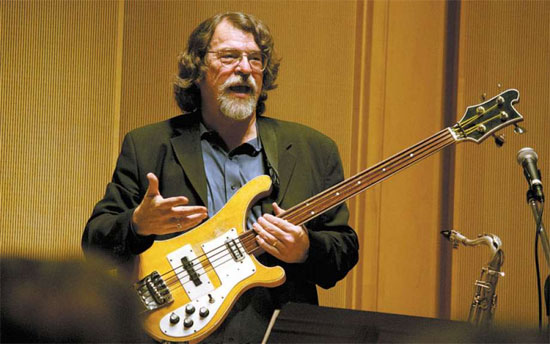 This is a tangent, almost an “inside baseball” question, but I have to ask. I’ve seen a couple photos of the quartet showing you holding a Rickenbacker 4001. I could be way off the mark on this, but I don’t recall seeing many jazz artists playing that instrument.

Are you a bass player to ask such a question?

I’m a rock and roll keyboard player. So I’m very familiar with the Ric 4001 because of the mid-period Beatles … lots of really cool bands use it. It has a very distinctive sound, like nothing else. But I don’t know that I’ve ever seen a jazz player play one.

Yeah, well, it’s sort of my own little Forrest Gump moment, because when I was in my rock and roll groups, before I started playing jazz professionally, in the late ‘60s on West 48th Street in New York City is where all the big music stores were. Like Sam Ash and Manny’s, etc., and littler shops that had all these basses and guitars hanging in the windows, and I just thought, “It’ll be cool: I want to be the first rock musician to play fretless bass!. I think it would be a different sound.”

So, I went out, went up and down the street and there were only two fretless basses on that whole street that I saw. And one was, literally, the one that I bought: the Ric as a fretless instrument. And, oddly enough, it always had those nylon wound strings on it, which give it a whole different world, because, you know, the bass player in Yes, the Chris Squire sound, that very twangy metallic.

The other [fretless at the time] was a Fender jazz bass, and this was way before Jaco [Pastorius]. So, even the idea of how Jaco might sound didn’t exist yet. I’m sure Jaco existed somewhere in a night club in Florida playing his ass off, but we didn’t know about it.

So, as soon as I heard it, I said, “Wow, this sounds really a lot more like an upright than most basses, and I think that could come in handy if I start playing with my dad for any reason.” And at that point I had done some playing with him.

And you’ll be happy to know that you’re very perceptive to wonder about it, because there is a magazine, which is semi-defunct now, called Bass Player magazine. The guy who is the editor of it heard me play a concert in New York City and went, “Oh my god, you play in such a different style and have such a different sound. That instrument is so bizarre. I’m going to do an article about your bass and you.” And it was in the last issue to be printed … Let’s see who’s on the cover. “25 years with Alice in Chains.” And now they only print that magazine in England, because a lot of people ride the subway and, therefore, they’ll buy the magazine and read it on the subway. I think, they’ve stopped printing it in the United States.

Come back for still more from my fascinating chat with Chris Brubeck.