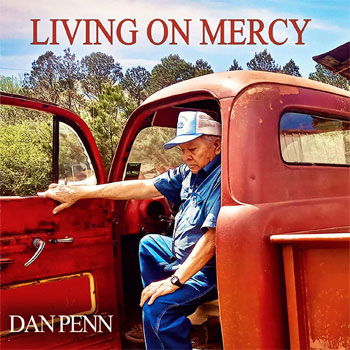 Sixty-plus years into his career, Alabama-born songwriter and musician Dan Penn returns with a new album. Out on August 28, Living on Mercy showcases Penn’s brand of music, a style that can be labeled as anything from pop to country to soul to rhythm and blues. That genre-spanning character has been a hallmark of Penn’s work since his earliest recording session, 1960’s “Crazy Over You.”

Dan Penn’s hit songwriting credits make for a long list. A composer of songs with a trademark Southern pop-soul flavor, he’s written or co-written songs made famous by the likes of Aretha Franklin (1967’s “Do Right Woman, Do Right Man,” #9 pop, #37 R&B), James and Bobby Purify (“I’m Your Puppet,” #6 pop, #5 R&B that same year), The Box Tops (“Cry Like a Baby,” #2 pop in 1968), James Carr (1967’s “The Dark End of the Street, #10 R&B) and many others. His songs have also been covered by artists as varied as the Detroit Cobras, Nick Lowe, Merrilee Rush, Faron Young, Jerry Garcia, Albert King and Hank Williams, Jr.

As a producer and/or engineer, Penn has been involved in the creation of many classics as well: The Box Tops’ “The Letter” and recordings by Irma Thomas, Solomon Burke, Patti LaBelle and the Bluebells, Ronnie Millsap, Frank Black, Steve Cropper, Yo Yo Ma and many others. Penn’s creative outpouring has enhanced the worlds of pop, rock, soul, country, R&B and beyond.

And while he’s recorded comparatively few albums under his own name, Penn remains engaged and active today at age 78. For many years now he has mounted tours with friend and frequent songwriting collaborator Spooner Oldham; the pair’s live shows are a kind of informal masterclass in songwriting, often taking their compositions back to skeletal demo form to reveal the simple genius in those songs.

Dan Penn’s latest project is a solo album, his first since 2016’s demo collection Something About the Night. And his first album of new material since 1995’s Do Right Man. Recorded in Nashville and Muscle Shoals, Alabama, Living on Mercy demonstrates that Penn’s muse is as strong as ever.

While he sometimes writes on his own, Penn is immersed in the collaborative songwriting tradition; that’s the approach he used on Living on Mercy. That method has worked well for him since his earliest days. “Co-writing is a special deal,” he says. “You gotta know your way around: somebody’s gotta give, and everybody can’t talk at one time.” But he says that for him, the process – involving “two people, sometimes three” – means that “everybody offers their opinions and their licks.”

Penn values certain qualities in a potential songwriting collaborator. “I can write on my guitar by myself,” he says with characteristic modesty. “But it’s not always exactly what I want. I don’t go to the good chords; I’m kind of limited.” He mentions Will McFarlane, piano player on the new album and his writing partner on “I’ll See You in My Dreams” and “I Didn’t Hear That Comin’,” two of the standout tracks on Living on Mercy. “Will can carry you to places that you might want to go,” he says. “And that’s what I’m always looking for: a better musician than me.” That, he says, is one of the best reasons to co-write.

When pressed, Penn admits that on occasion, there’s friction in the co-writing process. But he long ago figured out how to deal with that kind of situation. If it happens that he wants the song to develop one way and his partner sees it differently, Penn says, “I just let them have it. If they want it, they can take it. I’ll write another one.”

Even when the song is his, Penn tries to stay open-minded about how another artist might interpret it. He recalls the 1966 session with the Purify brothers. “Me and Spooner had been writing every night over there at FAME Studios,” he recalls. “We had the studio: the mics, the pianos, the big speakers, the board. We had it all.” He says that studio owner Rich Hall gave them every opportunity to write something good. “So we wrote ‘I’m Your Puppet,’ and the Purify Brothers cut it. I was the engineer on that record.”

Penn admits that at first, he wasn’t pleased with how the session went. “I thought they had it too fast,” he says. Worse still, they changed his lyrics from “I’m the puppet” to “I’m your puppet.”

“I didn’t particularly like the way they did it at the time,” he recalls. But then he delivers the punch line: “But after I got my couple of first [royalty] checks, I said, ‘You know, I like this!’”

Penn was in his early twenties when “I’m Your Puppet” hit the charts; he had previously scored with a hit single recorded by Conway Twitty, “Is a Bluebird Blue?” But “Puppet” was his first major success, and it set him on a course he follows to this day. His father had encouraged him to take a job at the plant where he worked; they pay was better than at FAME Studios. “I just stayed with it,” he says. “And after ‘I’m Your Puppet,’ I said, OK, don’t look back. Just lean forward.”

Some fifty-plus years later, Dan Penn’s approach to working in the studio remains straightforward. “We cut the album old-style,” he says. While many of today’s recordings are assembled from individual parts recorded in far-flung locations, that’s not Penn’s way. “Everybody is on their instrument, and then away we go,” he says. Remarkably, that live-in-the-studio approach carries right through to the vocals. “The vocals are the ones that came off the floor,” he says. “When they were playing, that’s what I was singing.”

But Penn – an old hand behind the recording console – doesn’t look down upon the more “modern” methods. While emphasizing that for him, playing live while recording is important to capture the right feel, he respects the layered approach, too. Plenty of good albums are made “by just a couple of people and some drum machines coming off of the computers,” he says. “And they’re pretty realistic. I’ve got a friend who cuts that way, and I love his records.”

There’s a potential downside to using real musicians, too, Penn admits with a chuckle. “A real band can kind of get away from you,” he explains. “It brings on slack between the drums, the bass and everybody else.” But his old-school perspective brings equanimity to that realization. “Slack can be good, and it can be bad,” he says.