Guide for the Turtles Fan: An Album-by-album Discussion with Mark Volman (Part 3 of 3) 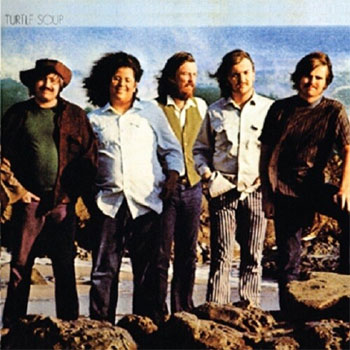 Turtle Soup (originally released October 1969)
For their fifth album, The Turtles made a highly unconventional choice in producer: they called on British musician Ray Davies, best known as leader and songwriter of The Kinks. Prior to working on Turtle Soup, Davies had never produced another artist. But Volman is proud of the finished album, the only long player to feature no songs from outside songwriters.

“As an album package – songs and everything – Turtle Soup is probably one of the best we put out,” Volman says. He doesn’t make outsize claims about The Turtles’ body of work, though. “I’m not sure that any of our albums are Brian Wilson quality. Brian had the whole thing in Hawthorne, California; we were just a bunch of kids from [L.A. neighborhood] Westchester. That’s really what we were,” he says. “We weren’t a band that was going to go into history, but we capture our place in time very comfortably.”

Highlights on Turtle Soup include the darkly sophisticated “Somewhere Friday Night,” the ambitious arrangement of “Love in the City” and the aggressive rocker (with a folk protest vibe) “House on the Hill.” “You Don’t Have to Walk in the Rain” is another classic in the mold of the band’s sunshine pop hits. And the instrumental work on “She Always Leaves Me Laughing” – especially Al Nichol’s chiming 12-string guitar and Jim Pons’ kinetic bass lines – adorn a memorable tune. Drummer John Seiter turns in a first-class vocal, too, on “How You Love Me.” The carefully layered sound of Turtle Soup foreshadows later Flo & Eddie masterworks like “Marmendy Mill,” “Keep it Warm” and “Mama, Open Up.”

Several tracks on the second LP in the Turtle Soup vinyl set appeared previously on Rhino Records’ Shell Shock, released in 1987. Those tracks make plain the fact that near the end of their time together, The Turtles were making some of the best music of their career. “If We Only Had the Time” was so good that Kaylan and Volman would re-record it with a new arrangement on their 1973 album Flo & Eddie. The bonus LP also includes five demo recordings (two of those previously unreleased) and a radio spot promoting the 1969 album. 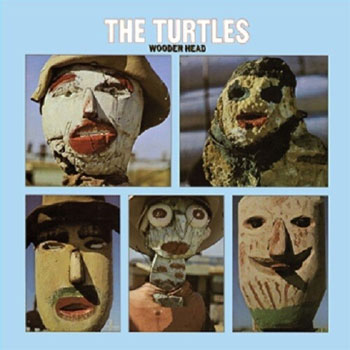 Wooden Head (originally released September 1970)
The Turtles themselves had little to do with the release of what would be their final album. Producer Bones Howe assembled this collection of previously-unreleased material at a time when the group had already split. Most of the songs on Wooden Head were recorded years earlier, in the period between You Baby and Happy Together. Poorly promoted on release, it would become the rarest of all Turtles LPs.

The eleven songs on the original Wooden Head rank among the band’s least-known material – no hits – but as with all Turtles material, the music has its charms. And the bonus disc includes alternate versions and mixes of better-known songs along with some rarities and one previously unreleased track, an alternate take of the band’s pop arrangement of “We’ll Meet Again,” a 1939 classic popularized by Vera Lynn.

Volman is very pleased with the quality of the Manifesto reissues of The Turtles’ catalog. “We always wanted to have a vinyl recollection of our history,” he says. And coupled with Manifesto’s 2016 2CD set All the Singles, the band’s entire body of work is readily available for 21st century listeners.

Mark and Howard’s effort to bring all of their material together under one roof may yield future reissues, too: after their tenure with Frank Zappa’s Mothers, they continued with an even more varied and sophisticated musical project. Re-branding themselves (for legal/contractual reasons) as Flo & Eddie, the duo made a series of ambitious records that rocked hard, swung for the fences creatively, and provided even more laughs. They released five records for three different labels between 1972 and 1981, and today they own the rights to all of those recordings as well.

Will those albums see deluxe reissue? “Destiny has a way of reeling itself up,” Volman says. “And I think they will, someday. You never know.” He even makes mention of a batch of unheard material that could serve a Wooden Head-like role in the Flo & Eddie catalog. “Howard and I have a bunch of material that hasn’t been released; we didn’t know how we were going to use it.”

Working with different musicians, Kaylan and Volman re-launched The Turtles in the early 1980s. Featuring fellow ‘60s sensations (variously including Mark Lindsay, The Cowsills, Gary Lewis, The Grass Roots and others), their highly successful Happy Together Tours began in 2010 and continued until 2019 (the COVID-19 pandemic put a stop to the 2020 tour before it began).

2015 marked the half-century anniversary of Kaylan and Volman’s musical partnership. That same year, Volman dealt successfully with throat cancer. Today, it’s fair to wonder about the post-pandemic future of the Turtles. Kaylan – who, like Volman, turned 73 earlier this year – sat out the most recent Happy Together Tour to deal with health problems of his own, and he has long made it clear that he has no interest in reuniting the original band. “We broke up for a reason in 1970, mainly because we couldn’t stand each other,” he told me in a 2009 interview. “So the thought of getting back into that mind-trip after all of these years of relative calm, to me, is just a shattering thought. That would never, ever happen.”

But in 2020, Kaylan’s lifelong musical partner strikes a more accommodating tone. “We’ve had a couple of producers step up and think it might be fun to do the original band,” he reveals. “Because we’re all still living: Al [Nichol], Jim Tucker, Jim Pons, Johny Barbata, me, and Howard.

You may also enjoy …