Book Review: Steve Hackett — A Genesis in My Bed 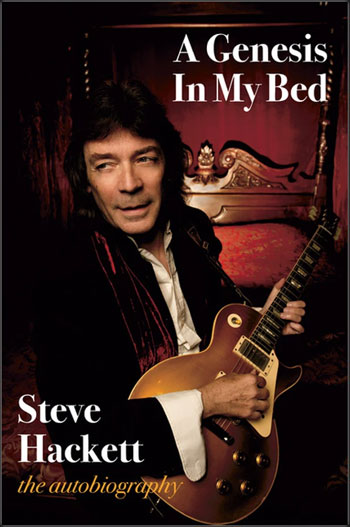 As a longtime fan of early Genesis and the solo work of Steve Hackett – as well as having interviewed Hackett on no less than three occasions and seen him live onstage as well – I simply couldn’t pass up the opportunity to read his autobiography/memoir, A Genesis in My Bed. It would be a good halfway through reading the book before the title made any sense, but along the way I learned a lot more about his life, details that put his music into a more well-rounded context.

As I first dug into the book, I found its tone a bit on the idiosyncratic side. Initially, it didn’t seem to read much like Hackett comes across in conversation. But a mere few pages in, I adjusted to his style, and it flowed wonderfully from there. He’s a witty storyteller with a keen eye for detail, and A Genesis in My Bed is written in an admirably personal style.

The book isn’t exactly jam-packed with session details and the like; one might say that it’s more of a chronology of its author’s emotional development. Hackett’s childhood – punctuated by a transatlantic relocation – clearly affected his direction as a person and a musician. He recounts in vivid detail the details of his youth, which in hindsight makes it all the more surprising that he ended up in Genesis.

Hackett doesn’t shy away from addressing the sorts of working relationships he had with his Genesis bandmates. Those familiar with the band’s inner workings will likely be less than surprised to learn which members he got along best with, and which proved more problematic. But he lays out the scene skillfully and diplomatically; as often as not, Hackett provides a bit of detail and leaves it to the reader to connect the dots.

The guitarist’s reasons for eventually leaving Genesis are recounted in a way that makes a good deal of sense, and his coverage of his post-Genesis work will remind readers that he’s been extremely prolific. And somewhat paradoxically, his prodigious output has been characterized both by a sharply defined creative vision and an eclectic nature. That means that one album often sounded very little like the one that came before or after it. The book covers his musical activities right up to present day.

Like many artists, Steve Hackett’s music has often been colored by his life experiences. As such, certain albums – like Out of the Tunnel’s Mouth from 2010 – have a character that captures his emotional state during their making. In A Genesis in My Bed, he goes into some detail about what exactly was happening during those periods.

There’s not a lot of sex and drugs in Hackett’s book, but there is some. The former is connected to the book title, and the latter is addressed in a somewhat perfunctory manner. Yet in context that treatment makes sense. It’s not designed as a warts-and-all memoir. The book is filled with amusing and enlightening anecdotes, many, many of which are structured along the lines of, “the tour/session/experience generally went well, save for that one time…” and then he goes on to recount the details of that one time. It’s an effective approach to one’s history.

Readers interested in the man’s life and work are encouraged to pick up a copy of A Genesis in My Bed.