During his time with Genesis, guitarist Steve Hackett released one solo album, 1975’s Voyage of the Acolyte. That album featured two of his then-current band mates – bassist Mike Rutherford and drummer Phil Collins – helping out, and only one track featured Hackett’s vocals. So after the unassuming Hackett left Genesis in 1977, it may have come as a bit of a surprise to that group’s fans that he would embark on a successful and prolific solo career. His latest album, The Night Siren (set for release March 24) is Hackett’s 25th solo album. (In contract, Genesis released only 15 albums of new studio material in its nearly 30 years as a functioning group.)

And while he was always a superb instrumentalist – one listen to his sublime guitar solo on “Firth of Fifth” from Genesis’ 1973 LP Selling England By the Pound is all the proof one could need – Hackett has grown immeasurably in the past few decades as a musician, a composer, and a vocalist. And at age 67, Steve Hackett may have just made the finest record of his career in The Night Siren.

I’ve had the pleasure of interviewing Hackett twice before: in 2010, shortly after the release of Out of the Tunnel’s Mouth, and again in 2016 on the eve of a North American tour. In that first interview, we discussed the backstory of Out of the Tunnel’s Mouth: the painful dissolution of Hackett’s second marriage, and the development of a new relationship – one that is both personal and creative – in its wake. In our second conversation we focused on two topics: the documentary film Genesis: Sum of the Parts and Hackett’s ongoing “Genesis Revisited” live and studio projects.

For our third conversation, the main topic would be The Night Siren and his development as an artist. The following is an edited transcript of our interview, which took place in mid-January 2017. – bk 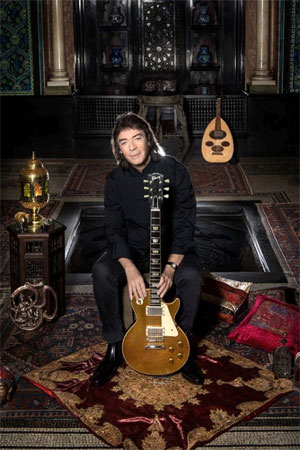 BILL KOPP: The underlying theme of The Night Siren is a call for unity in divisive times. Can you tell me a bit about what led you toward that theme?

STEVE HACKETT: Well, I think more and more it seems that the world seems to be heading towards right-wing politics. The refugee crisis seems to have gotten to the point whereby the rest of the world seems to be adopting a kind of fortress mentality, instead of assimilating the people and trying to fix the problem that we’ve created in the first place. It just so happens I have friends from all over the world, and I have two working on this album – one from Israel, one from Palestine – and I wanted to demonstrate that it was possible for people to do what musicians have done naturally for years and years and years. We naturally cross borders; this is what we do. Music is a great big melting pot and I think that – at the very least – music is an ambassador for peace. And we’re showing people that there is a common language, and it’s the language of the heart.

You often record at home using your home studio; other musicians will often send their tracks digitally. Was that the method that you used on this album as well?

Yes, but it’s part of it. Some of it was done on location in different studios with different people, but I did quite a lot of it at home but then I did get a lot of facilities as well to record other people. For instance, Malik Mansurov from Azerbaijan was recording in Budapest. Some stuff was recorded in Miami; Nick D’Virgilio was recording there. Many people sent in their stuff, but sometimes I went to them. So, yes … it’s a bit like making a movie on location. But sometimes you don’t even have to visit that location, of course. The “second camera unit” is out there. We file share, but we also have conversations face-to-face.

Time was, musicians would all show up in a studio together and work on an album; do you think those days are pretty well gone for good now?

No, I don’t think so. I think bands still function like that, but technology affords you the facility of being able to work face-to-face yet remotely. It means that people get their parts right, and then they send you something that they’re happy with instead of people interfering with each other’s performances before the other guy really knows the song. So you have a chance to perfect it, to send someone something that’s in time and in tune with the song.

I’m a big fan of Nick D’Virgilio’s work back when he was with Spock’s Beard. How did you come to know of his work and bring him into the project?

I first heard about him via Genesis [D’Virgilio was a member of Genesis in the group’s post-Phil Collins era; he played on the final Genesis album Calling All Stations – ed.], but funnily enough I first saw him playing with Cirque Du Soleil in London. I was very impressed with him. And I went to meet him, I think, halfway through that show. He’s just sent us an extraordinarily impressive drum check for one of the songs, “Martian Sea.” He’s a great player.