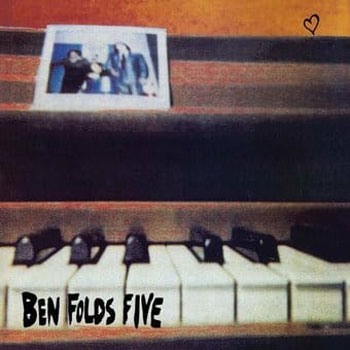 In 1997, Ben Folds Five’s second album, Whatever and Ever Amen took the charts by storm. By ’90s measures as unlikely an act as could be imagined, the North Carolina-based group succeeded with a piano-led (and guitar-free) approach at the height of the grunge era. The band’s second full-length was buoyed on the strength of its single, “Battle of Who Could Care Less” (#22 on the U.S. Modern Rock chart) and the viscerally emotional album cut “Brick.” That album would represent the commercial high water mark for the group, though subsequent releases would earn critical plaudits as well. And while singer, songwriter and composer Folds would go on to a solo career, the band – a trio, as it happens – would reunite for an album in 2012.

But a year and a half before releasing their breakthrough LP, Ben Folds Five issued their self-titled debut album. It didn’t make a huge commercial splash at the time, though on the success of Whatever it eventually went Gold. And many of the qualities that made the second album a success were already in place right from the start.

Ben Folds Five resolutely staked out its own unique position on the musical landscape. Waggishly choosing a misleading name was just part of the strategy of throwing listeners a bit off balance. Eschewing guitars, BFF instead employed Folds’ supreme skills on piano as one of its primary melodic tools. The other was Robert Sledge’s bass guitar; in addition to playing the traditional rhythm section role (with drummer Darren Jessee), Sledge essentially played “lead bass,” delivering melodic lines high on the neck of his instrument, often run through a fuzz effects box. And all three musicians sang, giving the group the ability to craft complex vocal harmonies.

But the core of Ben Folds Five’s music would be its leader’s songwriting. And even when Whatever and Ever Amen became a runaway success, with the band touring far and wide, many of the songs on the debut album would become and remain fan favorites. Folds’ compositional style would draw as much from the singer-songwriter tradition (Carole King and Harry Nilsson, for example) as from arena rock of the ‘70s (specifically Elton John) as well as various forms of jazz. All of those textures rolled together with a rock sensibility created what Folds liked to jokingly call “punk rock for sissies.”

Ben Folds’ spirited singing and energetic piano work is at the heart of the album’s opening track, “Jackson Cannery.” The song rocks hard, even without guitars. Sledge’s melodic basswork adds countermelody to Folds’ kinetic pounding of the keys. There’s a truly organic, live-in-the-studio feel to the song, a vibe characterized by the whole album.

Even better is “Philosophy,” with a grand introduction that rivals Elton’s “Funeral for a Friend” in intensity. But the song itself is a melancholy, deeply textured tune with plenty of nuance and bitter humor. And again, the vocal harmonies elevate the song even farther. As consistently fine as the record is, “Philosophy” is a strong contender for its best track.

“Julianne” is a bratty rocker in the style of Green Day … if Green Day had a piano and no guitars. The trio is on fire as Folds tickles the ivories while his rhythm section charges forth in splashy, delightfully messy fashion. “Where’s Summer B.?” is Folds at his melodic best, with a sound that suggests a hard-rocking Burt Bacharach.

“Alice Childress” demonstrates that Ben Folds Five isn’t only about intensity; the subtle and heart-rending arrangement displays the kind of sophistication the group would explore on subsequent releases, most notably 1999’s masterful The Unauthorized Biography of Reinhold Messner.

But perhaps the song that distills all of Ben Folds Five’s assets into the space of just over four minutes is “Underground.” A playful poke at the musical hipster scene, “Underground” is as mock-dramatic as the music from The Rocky Horror Show. Combining wistful nostalgia, on-the-nose mocking of scenesters and an infectious melody, the song has few parallels in pop music. It rocks hard, swings like ‘70s glam and sports an ambitious arrangement every bit the equal of (the far more densely layered) music of Jellyfish. Add to that an irresistible singalong chorus and the result is a classic. In a delightfully perverse gambit, the song ends with a jazzy bit.

Had Ben Folds Five ended there and then, it would have been a superb EP. But the second half of the album is strong as well. The nervy “Sports & Wine” showcases the trio’s tight playing and – yet again – the supreme musicianship of all three players. “Uncle Walter” is nearly power pop, with beefy bass propelling the song’s breakneck pace. Some intricately voiced piano chording adds a layer of complexity to what’s essentially a straight-ahead tune.

“Best Imitation of Myself” is songwriter Folds in heart-on-the-sleeve mode. The hard-hitting playing is contrasted by soaring, heartfelt vocal harmonies. For “Video,” Jessee and Sledge dial back their intensity a bit, allowing more space for Folds’s piano and voice. But even still, the tune rocks, with dramatic crescendos and a lovely solo.

Despite its title, “The Last Polka” isn’t really a dance tune of any kind. There is a definite Eastern European flavor to the arrangement, but more than anything else it’s a showcase for the players’ skill that just happens to have lyrics which tell a story. The album closes on a sophisticated note with “Boxing,” a melody that recalls Randy Newman. Folds’ singing conveys deep heartbreak and regret in melodramatic fashion. It’s more than three minutes in before the arrangement folds in additional instrumentation: violin, viola, cello. Those elements end the record and – in retrospect – can be seen as pointing the way toward the future of Ben Folds Five. But still no guitars.