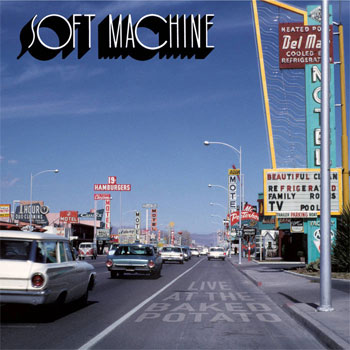 The original Soft Machine was a kind of jazz answer to Pink Floyd. Contemporaries of Syd Barrett’s group, they often showed up on the bill with his band. But because the Canterbury group was grounded in jazz – albeit with a rock sensibility – it was destined to remain well outside the commercial sphere in which the Floyd would flourish.

It’s more than a half century later now, and none of the original members remain with the group. For several years, an aggregation made up mostly of key mid-70s-and-beyond members toured and recorded as Soft Machine Legacy, and now they’ve dispensed with the “Legacy” tag and reverted to the old name.

Far more importantly, they earn the right to use it. The current lineup John Etheridge, Roy Babbington and John Marshall have decades with the group, and Theo Travis established his bona fides on his own. On this new live album, the band tackles early Soft Machine material with skill, energy and finesse. Right out of the gate, they nail “Out-Bloody-Rageous” from the old lineup’s monumental Third double LP. The new material – not to mention the fact that this Soft Machine has a guitarist (Etheridge) – meshes seamlessly with the vintage pieces.

There’s no end of bands trading on the glories of past lineups. Soft Machine stands apart and above such outfits; as Live at the Baked Potato makes plain, this lineup deserves to call itself Soft Machine.