This story is the first of three this week in which I connect with Asheville-based companies serving the music industry. — bk

Any musician in Asheville can tell you the ways in which the COVID-19 pandemic has adversely affected his or her livelihood. To varying extents, the same is true for local businesses that serve the music community. Each has made changes to adapt to the current set of circumstances as well as plans for the future. And while staying clear-eyed and realistic, management at three of those local businesses each express a positive outlook for music in a post-pandemic world. 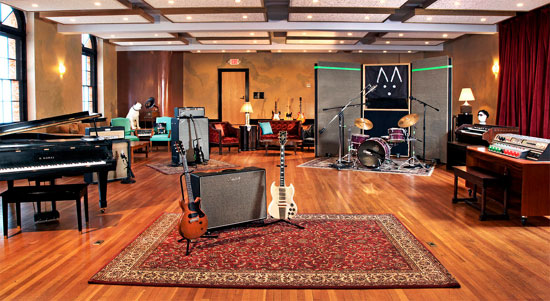 Payment plans, discounts and analog sweetening
Echo Mountain Recording got out ahead of the situation, canceling sessions even before local business shutdowns became widespread. “We finished up a couple of audiobook [sessions],” says studio manager Jessica Tomasin. “Because those were really easy to do and control the environment, cleaning before and after.”

The studio temporarily closed its doors at the end of March, but Tomasin continued to get requests for booking. “And I totally get it,” she says. “People are at home, writing a bunch of music. And they want to come in and record it.” So as the studio made plans for a careful reopening in late May, it also made some changes to accommodate the new reality.

“Just like everybody, you’ve got to pivot and get creative,” Tomasin says. So Echo Mountain is promoting its payment plan. Installment payments are something that Echo Mountain has always allowed, but the studio has never made a point of promoting the program. Now, tough economic times for musicians make that kind of flexibility more important.

Tomasin notes that many self-quarantined musicians have been writing and recording on home equipment. So the studio is also offering discounted rates through August 1 “to let people run their mixes through our console, to sweeten the sound a little bit with some vintage analog gear.”

Business-wise, 2019 was the best year yet for Echo Mountain. Most of the studio’s new business comes via word of mouth. But Tomasin says that the slowdown and nearly two-month closure provided an opportunity to take a more proactive approach. “We’re focusing more on marketing,” she says.

Conducted by Tomasin and Echo Mountain’s engineers, a new series of interviews will explore topics of interest. “They’ll talk about some of the records that they’ve done,” she says. “What’s their favorite signal chain for vocals? What’s their favorite piece of gear at the studio?” She says that beyond its use as a marketing tool, the interview series is a way for Echo Mountain to “highlight these great producers and engineers who have come through the studio.”