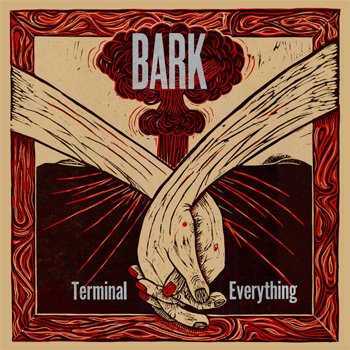 As a rule, I look askance at guitar-and-drum duos; for my money, Dex and Crow did it well enough back in the Flat Duo Jets days that I don’t really need anybody else to do it. But when the artists involved are Tim Lee and Susan Bauer Lee, attention must be paid. The former was a prime mover in the Windbreakers, and the duo were in recent years two-thirds of TimLee3.

Today it’s just the Mr. and Mrs., and they call themselves Bark. But beyond that, all of the charms of their TimLee3 work are intact, alongside sturdy songwriting (by the couple). Sometimes they sing in octave-apart lockstep (“Walk Small”), and other times one or the other takes the lead. The duo employs instruments that subtly expand on the duo format by filling in some of the sonic spaces normally inherent in that configuration. Lee plays six-string bass and baritone guitar while Susan adds electric piano in addition to drums.

The result, really, has the ambience of a full – if spare – band. And that keeps the focus on the songs themselves. There’s a sense of heartbreak and loss pervading the album, a feel that’s underscored by a back-cover dedication to the memories of no less than four people (plus two more who might be animals).

That said, Tim and Susan have an upbeat demeanor as they sing that they have “Nothing to Complain About.” Nor will you when you spin this record. That optimism shines through on the dB’s-like “The Good Part.” Fans of the Windbreakers, TimLee3 and/or anything else involving either of these characters simply must add Terminal Everything to their collections. The vinyl pressing features lovely sleeve art and a lyric insert.