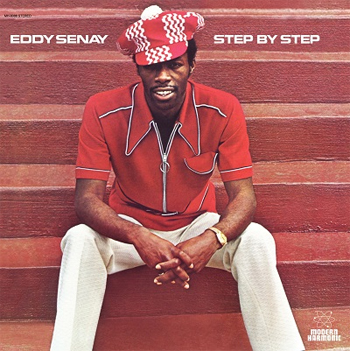 Clarence Avant was a Detroit entrepreneur, a figure who wanted to bring to the world Detroit music beyond that which Berry Gordy was doing. In the early ’70s his Sussex label did just that, releasing some astoundingly good albums by the likes of Dennis Coffey and Bill Withers. Instrumental funk was more or less Sussex’s coin-of-the-realm, and they did it well. The label was distributed by Buddah – not one of the biggest organizations in the game – so while the records got national distribution, they weren’t always the easiest to find. Music like Eddy Senay’s Step by Step would have been consigned to tee funk section of the record store – or to shops servicing a black clientele – so unlike the Coffey material, it often went unheard by white audiences.

Senay’s 1972 LP is a treat. Wholly instrumental, it features him on electric guitar, backed by Detroit session players. While the new reissue from Modern Harmonic features a hype sticker proclaiming “Fuzz-laden psychedelic guitar funk!” there’s more on offer here than just that. “Delgado,” for example, is a smoky, sultry number with loads of tasty Fender Rhodes licks. And Senay plays in a style that’s more jazzy than psych.

“Cameo” lays down some smoldering funk, but it too owes more to slow-jam instrosoul traditions than than anything else. “Shakedown” is a moody instrumentalist that would have worked supremely well as the soundtrack of a blaxploitation action film. There are even some fill licks that will sound suspiciously familiar to fans of Isaac Hayes’ Shaft soundtrack.

The fake-live ambience that opens “Phase 1” is a bit cheesy, as are the layers of reverb and massed hand claps. But the song itself is an appealing groove. And Senay digs even deeper into grooveland for “Safari,” laying down a stomping and simple riff upon which he vamps with fuzz, distortion and wah-wah. Congas provide another layer of interest. And though Step by Step is nominally an instrumental set, this cut features some chanted vocals.

“Shakeroo” almost sounds as if were flown in from another session, another time. The production feel is nothing like the album’s other cuts, and the two-chord verse owes a great deal to the Carlos Santana style of arrangement.

Senay and his associates pull out all the stops for the album closer. “Soul Preachin’” features tasty horn charts, a deeply funkly fizz bass line, gurgling rhythm guitar and rubbery wah-wah lead guitar. Even though the LP runs nearly 40 minutes, the time goes by quickly; it’s engaging enough to reward active listening, but Step by Step would make a groovy party record as well.

Senay was in his late 20s when he released this, his second LP. No further releases would be forthcoming from him on Sussex. My bit of poking around online yielded no further information about the guitarist.