Another Enchanted Evening: Blue Öyster Cult is Still Burnin’ for You

Blue Öyster Cult is best-known for its smash hit, 1976’s “Don’t Fear the Reaper.” A winning combination of catchy riffage, hard rock arrangement and borderline-progressive rock composition style, the standout track from BÖC’s Agents of Fortune quickly became a rock classic, and established the band as part of the era’s front line of bands.

But the Long Island-based group had been perfecting its brand of rock — a deft balance of metal, malevolence and humor —for many years before scoring a hit. First coming together in the late ‘60s as Soft White Underbelly and then as the Stalk-Forrest Group, the group cut an album for Elektra Records in 1968; it wasn’t released until 2001, and then only in a limited edition. 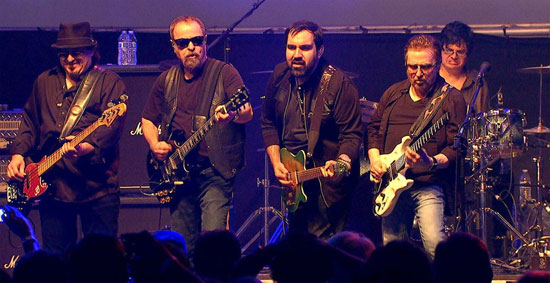 Blue Öyster Cult built its fan base the old-fashioned way, through incessant touring. BÖC earned new fans by putting on dynamic, incendiary shows opening for many of the era’s top rock acts including John McLaughlin’s Mahavishnu Orchestra and Alice Cooper. The band released its self-titled debut album in 1972, further refining and sharpening its sound with each successive release.

Leveraging its thrilling live presence, BÖC released its first live album, On Your Feet or On Your Knees in 1975. The LP earned a gold record, expanding the group’s reach into the hearts and minds of America’s rock fans. That set was quickly followed up by the watershed Agents of Fortune, BÖC’s first massive success.

Now a major musical force, the band delivered another stone classic in the 1977 single “Godzilla.” A second live set, the Platinum-selling Some Enchanted Evening, underscored the point that however solid the group’s studio work might be, BÖC was best experienced live.

Though the group featured several top-notch songwriters, and recorded songs written in collaboration with superb lyricist including Patti Smith and science fiction writer Michael Moorcock, BÖC often included cover tunes in its sets. Those songs were hard rocking tunes by like-minded artists: MC5’s “Kick Out the Jams,” Steppenwolf’s ‘Born to Be Wild” and the Doors’ “Roadhouse Blues” were typical examples.

As the era of MTV ushered in greater emphasis on audiovisuals in popular music, BÖC capitalized on the trend with the smash album Fire of Unknown Origin. With the Top 40 single “Burnin’ for You” and deep album cuts like the delightfully macabre “Joan Crawford,” the group began the task of winning over a newer generation of fans. Yet another live album, 1982’s Extraterrestrial Live — was released to build upon the band’s recent critical and commercial success; still two more live releases would follow in future years.

The remainder of the 1980s and beyond saw personnel changes and found the band failing to sustain its early momentum. But a resurgence of interest in classic hard rock — coupled with a thoughtful series of reissues of BÖC’s prime-era material — helped breathe new life into the band. Newly reinvigorated, the group — still featuring original members Buck Dharma (lead guitar) and Eric Bloom (vocals) recently announced plans to record and release an album later this year, its first collection of new music since 2001’s Curse of the Hidden Mirror.