Your Most Valuable Possession: Ben Folds Five’s ‘…Reinhold Messner’ at 20 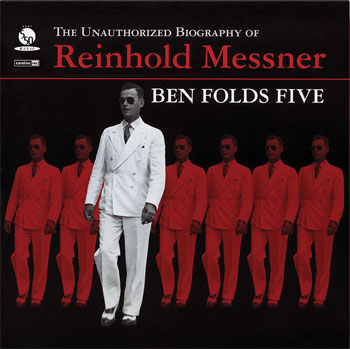 North Carolina-based Ben Folds Five came on the scene in 1995 with their self-titled debut album. The Chapel Hill band had been together two years, honing their unusual (in a rock context, anyway) approach: a piano, bass and drum trio with no guitars. The sonic space customarily occupied by lead guitar was filled with Robert Sledge’s fuzztone-effected bass guitar; Folds provided the rhythm and melody with his accomplished, inventive and expressive piano work. The band’s snarky outlook extended beyond its name: “punk rock for sissies” is how Folds playfully described his music.

1997’s Whatever and Ever Amen was the group’s breakout release; in the wake of its success Ben Folds Five mounted a major tour, and played a high-profile set on television’s Sessions at West 54th (in 2018, that recording finally got a CD and vinyl release; those both feature liner notes by this writer, based on interviews with Folds).

If one listened closely along the way, though, it was clear that Folds and his bandmates were simultaneously committed to the trio format yet bristling to move beyond it. The latter motivation led to the group’s curious third (and seemingly final) album of new material, 199’s The Unauthorized Biography of Reinhold Messner. From its title on down, Biography is a strange, experimental and not entirely immediate collection of songs. But time has proven that BFF’s third album may well be its finest.

“Narcolepsy” opens the album. A hypnotic piano melody in three-quarter time, it starts off with a more classical feel than is typical of the group’s earlier material. But when Sledge and drummer Darren Jessee join in, the arrangement explodes; it’s a melding of baroque and hard rock textures. Sweeping strings add grandeur to the song, with buzzing bass, slashing cymbal hits and breathtaking violin ensemble work. It’s nearly a minute and a half before Folds begins singing. The song’s somewhat angular melody signals that Biography isn’t going to be a readily accessible rock album. The tune’s midsection chugs along like the Move, while Folds sings alternately in an oddly dispassionate tone and then a highly emotive roar. The maelstrom of instruments – heavy on the strings, and with prominent use of throbbing analog synthesizer – likely surprised listeners who fell in love with the group over songs like “Underground” and “The Battle of Who Could Care Less.”

“Don’t Change Your Plans” is more conventional, with Folds channeling his inner Harry Nilsson: fetchingly alluring melody and literate love lyrics. The song makes full and effective use of Folds’ facility with aural shade and light. Stacked vocal harmonies, a kinetic piano part and muscular bass playing are among the song’s highlights. But it’s the very Tijuana Brass-sounding trumpet solo – backed by more strings – by which the song leaves its most indelible mark.

The melancholy “Mess” opens with a tinny piano playing a part that sounds straight out of Al Stewart’s “On the Border.” The gentle yet impassioned melody hearkens back to early ‘70s singer-songwriters. Once again, the string arrangement adds a great deal of emotional content to an already stirring tune. In the third verse, nearly all the instruments (except drums and strings) drop out, making the re-entry of the full group (with more harmony vocals) even more effective. It’s a triumph in most every way.

Darren Jessee’s “Magic” sounds like an elegiac Elton John deep album track. And – yet again – those strings! John Mark Painter’s conducting and arrangement on Biography raises what would have otherwise been a very good album to the level of a truly great one. It’s followed by the somnambulant and hazy “Hospital Song,” a downbeat cousin to “Brick.” It features a brief, jazzy and understated piano solo.

The reverie of that song is broken by the album’s centerpiece, “Army.” The autobiographical tune has no end of clever lyrics, and the tune only gets better as it progresses. The massed horn charts are hair-raising, taking a funny yet poignant song and transforming it into a brassy tour-de-force. Jessee’s snappy drumming and Sledge’s beefy bass provide the most solid of foundations. And Folds’ barrelhouse piano solo is played with wonderfully reckless abandon. More than anywhere else on the album – and, for that matter, throughout their entire catalog – here, Ben Folds Five sounds like the Wrecking Crew.

Picking up a lyrical cue from “Army,” “Your Redneck Past” sounds like a (very good) outtake from the first BFF album. As he often does, Folds makes pop culture references in his lyric, name-checking Billy Idol and rapper Kool Moe Dee. Sledge gets some interesting mileage out of sound effects made on the strings of his bass. Jazzy interludes coexist with “yo!” filled scratching sections. The various sonic elements of the song ought not to work together, yet somehow they do.

A bizarre cut, “Your Most Valuable Possession” weds an atmospheric instrumental track – a distant cousin of Carole King’s “It’s Too Late” – to an answering machine message left by Folds’ dad. If one listens past the “found” spoken-word part, there’s some tasty electric piano work going on.

Once again picking up a piece of “Army,” “Regrets” begins with words and melody lifted from the very end of the former track. But then the song heads in a completely different direction, with insistent percussion that seems to draw from Sergio Mendes and Brasil ‘66. Folds plays some very jazz chords, while Sledge lays down a delightfully busy bass line. More analog synthesizers are splashed over the arrangement. Yet again, the group combines musical elements that – on the face of it – don’t belong together. The end product isn’t really classifiable as rock, jazz or pop – in places it’s closest to “easy listening,” even though it rocks – and it’s wonderful.

“Jane” is more easily classified: it’s jazz-pop, centered around Folds’ electric piano, with firm and understated accompaniment from Jessee and Sledge. The bridge vocal is a thing of beauty.

The Unauthorized Biography of Reinhold Messner concludes with “Lullabye.” The gentle tune has a character and lyric to match its title and placement. The song doesn’t exactly sound like The Band, but it does show hints of Folds’ appreciation for Richard Manuel’s piano style, with a bit of Leon Russell tossed in for good measure. The string arrangement here is initially more subdued, until the final moments when it spars with Folds’ piano licks.

Predictably, Ben Folds Five’s final release before its extended hiatus would be a critical smash, but it didn’t sell as well as its Platinum-selling predecessor. Still, the album did reach #35 on the Billboard 200, technically a better showing than Whatever and Ever Amen (#42). The band broke up within a year of Biography’s release, with all members going on to solo work before reuniting in 2008 and 2011.