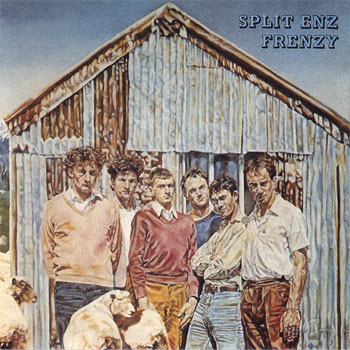 A skewed art-pop band greatly influenced by Roxy Music and Skyhooks, today Split Enz is remembered chiefly as the group that featured Neil Finn, later of Crowded House (and currently of Fleetwood Mac, of all things). That’s a criminal oversight; coming from New Zealand and Australia, Split Enz made some of the most intriguing music of its era, and helped build a bridge of sorts between the sophisticated art rock of the 1970s and the so-called new wave that would follow.

The earliest lineups of Split Enz featured primary songwriters Phil Judd and Tim Finn; the band’s ambitious, angular music (not to mention its visual presentation) drew from cabaret, dance hall and other non-rock forms, but a strong singer-songwriter sensibility and a droll sense of humor made macabre “love” songs like “The Woman Who Loves You” (from 1976’s Second Thoughts) off-kilter classics.

Lack of large-scale commercial success coupled with intra-band tensions led to the departure of Judd; replacing him would be Finn’s younger brother Neil. When Neil Finn joined Split Enz in 1977, he was all of 19 years old, and an inexperienced songwriter. But he quickly developed skills on all fronts; by 1980 he was fronting—and arguably leading—the band through its most successful era, with a string of popular albums that began with True Colours (including the hit single “I Got You”). The band’s popularity waned toward the end of its run (everywhere except at home, that is) and the band ended in 1984. Neil Finn and drummer Paul Hester went on to launch the vastly more popular Crowded House.

But backing up to the period just after Judd departed and young Neil Finn came on board, Split Enz cut and released an album’s worth of music entitled Frenzy. Originally released only in Australia and New Zealand, Frenzy would be the band’s biggest success to date, and stands as a transitional album between the arty approach of the group’s first few records (Mental Notes, Second Thoughts and Dizrhythmia) and its subsequent worldwide-scale releases.

Outside of Oz and NZ, the rest of the world wouldn’t get the opportunity to hear Frenzy until a repackaged, remixed and modified version of the album was released in 1982 by A&M Records, following the success of True Colours, Waiata and Time and Tide. That more widely available second version of the Frenzy LP is the one discussed in detail here. (A 2006 CD reissue of Frenzy changed, remixed and expanded the album yet again; in the confusion, some copies don’t even get the track listing right.)

The second edition of Frenzy opens with “I See Red,” previously a single released in December 1978. The debut recording of Neil Finn, it’s nonetheless older brother Tim who handles the manic vocal on this speedy tune cut at Startling Studios, a facility inside the Tittenhust Mansion home of Ringo Starr (and the former home of John and Yoko). Split Enz would rarely—before or after—embrace the punk ethos as fully as on “I See Red,” a hit in Australia and New Zealand but largely unheard elsewhere. Eddie Rayner’s demented, deliberately dissonant and lightning keyboard runs and Ramones-worthy rhythm guitar from Neil Finn give the tune a feel not unlike early XTC.

“Give it a Whirl” would have sounded far more familiar to relatively new Split Enz fans weaned on “I Got You.” A cavernous production aesthetic, layers of Rayner’s keyboards and a Neil Finn lead vocal (with Tim wonderfully chiming in on high harmonies) combine to make a winner. The band’s melancholy undercurrent shines through the dense production.

“Master Plan” is a far more stripped-down affair. Again with Neil Finn taking the lead vocal, the song is a kind of precursor to songs like “One Step Ahead” on Waiata. Some decidedly quirky sound effects from Rayner (and whistling from percussionist Noel Crombie) apply a carnivalesque feel to the song.

“Betty” feels more like early Split Enz; with strummed acoustic guitar and a Tim Finn lead vocal, it has a country and western feel crossed with bits of music hall; a sort of new wave/New Zealand rethink of the Kinks, with bits of Roxy Music thrown in for good measure.

The title track from Frenzy looks forward, not back. A hypnotic bass line from Nigel Griggs, some steady hi-hat work from Malcolm Green and more whistling provide a bed upon which Tim Finn recites spoken-word lyrics. After 45 seconds of that tension-building introduction, the song shifts gears into an infectious dance-themed chorus. But soon enough it’s back to the first arrangement, this time with groaning, nonsense vocals. The second chorus is even more spirited than the first, with some tasty analog synthesizer (and piano) from Rayner. The entire thing collapses wonderfully into mayhem, and it’s over in two and a half minutes.

‘Stuff and Nonsense” is a piano ballad, a style at which both Tim and Neil Finn would prove adept. This time it’s Tim, singing near operatic fashion while Rayner lays out some majestic piano and strings. This swoonworthy love song with heart-rending, dramatic intensity ranks among Split Enz’s best works.

Nautical sound effects open “Marooned,” a tune that rivals “I See Red” in its dizzying pace. Unfortunately, the song itself isn’t terribly distinctive, though the instrumental interlude—featuring dialogue between guitar and keyboards—is interesting.

All tracks up to this point on Frenzy (second release) save “I See Red” date from sessions produced by Mallory Earl in England in late 1978. The remaining tracks—side two of the LP—come from band-produced June 1978 sessions known as “The Rootin’ Tootin’ Luton Tapes.” Those tapes would be released in full on a 2007 CD.

The zany and slightly angry “Hermit McDermitt” sounds like a cross between The Tubes and early Split Enz; its arrangement foreshadows the character of more successful (and better) songs like “Hard Act to Follow” and “I Don’t Wanna Dance,” both from 1981’s Waiata (released in Australia and New Zealand as Corroborree).

The little-heard “Holy Smoke” is a delightful, country-flavored Neil Finn bouncy romp that presciently unveils the Crowded House sound eight years before that band would be conceived. It sounds wholly unlike anything else Split Enz would ever record.

The haunting Tim Finn vehicle “Semi-Detached” is built primarily around piano, synthesizers and vocals. The second half of the song features soaring lead guitar with strong shades of Phil Manzanera (who had produced the band previously). The stark contrast between songs such as this and Neil Finn’s more pop-oriented approach helps explain the departure of Tim Finn in the band’s final years. Split Enz would perform “Semi-Detached” on John Peel’s radio program in September 1978 during the band’s extended time in England.

Split Enz exercises its art rock tendnecies on “Carried Away,” one of the more menacingly rocking tunes in the group’s catalog. Clattering piano and a seething Neil Finn vocal are out front, but a cacophonous backing gives the track a dizzying, disorienting feel. Keyboardist Rayner turns in a tour-de-force performance. A lovely midsection hints at the dramatic “Pioneer” from 1982’s Time and Tide.

“She Got Body” is one of the most conventional pop songs ever recorded by Split Enz. It sounds like a slightly new wave take on British pop of the 1960s. Lead vocalist Tim Finn takes a Tom Jones-styled star turn mid-song, but otherwise it’s standard stuff. In their standard wacky and colorful garb, the band would mime to the track for a spirited performance on Australian Broadcasting company’s (ABC’s) Countdown.

A heavier than usual arrangement characterizes the slightly sinister “Mind Over Matter.” Tim Finn shows off his vocal versatility while the band chugs along; Neil Finn’s guitar—growling one minute, soaring the next—is a highlight. The song’s vocal harmonies are a treat, too. Percussionist Crombie plays spoons throughout. Crowded House occasionally covered “Mind Over Matter” in its live shows.

The second vinyl version of Split Enz’s Frenzy concludes with “Livin’ It Up,” a noisy, stuttering punk pastiche that has few if any of the qualities that made Split Enz special. As an interesting departure, it’s worth a listen, but ultimately represents an ill-conceived ending to an album; it feels like a tossed-off afterthought.

The 1982 version of Frenzy reached the lower rungs of the Canadian album chart but failed to gain traction elsewhere. And though the next album to follow, 1983’s Conflicting Emotions, contained several superb tracks—highlighted by Neil Finn’s classic ballad “Message to My Girl”—it represented a further (unwarranted) decline in the fortunes of the group. In 1984, a final lineup of the group, now completely led by Neil Finn, released Split Enz’s studio swan song, See Ya ‘Round. Crowded House launched less than a year later.