Few people are mas pleased as myself to witness (up close and personal) the vinyl revival. I’m not getting into the warmth-versus-digital argument; all I know is that as an old-school type who began purchasing LPs at age eight, I will always prefer the vinyl LP format. Plus, the artwork and liner notes are better viewed and read on a 12×12 canvas. I remain resolutely uninterested in downloads; when I’m at the gym, I listen to spoken-word podcasts, so no MP3s for me.

This roundup features four new indie releases, plus a garage rock oddity from the 1950s. 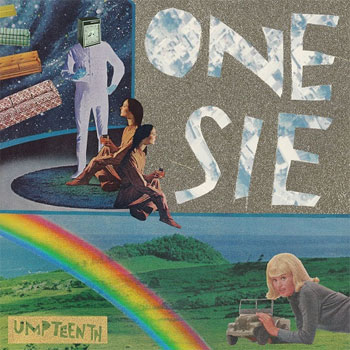 Onesie – Umpteenth
This music is quite difficult to classify. I hear hints of ’70s groups like Alan Parsons Project and Klaatu, though it’s a safe bet you’ll hear something wholly different. The tunes are pop songs with literate, quirky, idiosyncratic lyrics. If The Church’s Steve Kilbey expressed a sense of humor in his lyrics, they might resemble Onesie’s lyrics: snippets of word clusters that clearly mean something to their writer, but to the rest of us just sound cool. Even when the band uses distortion and wah-wah, the pop values shine through and make the tunes accessible. Songs like “Monster Manual” feature words of wisdom like, “If your life is small, maybe that’s the right size.” And the brief lyrics end with a quote from The Beatles, although you could easily miss it were it not for the inner sleeve printing those words: “And now it’s time to say good night. Good night.” If Onesie reminds me of any other band at all – I had to think hard on this – it’s probably Regurgitator. Onesie is weird and completely original, but those qualities are wrapped in a package that obscures them in favor of sonic accessibility. Do give this one a listen. 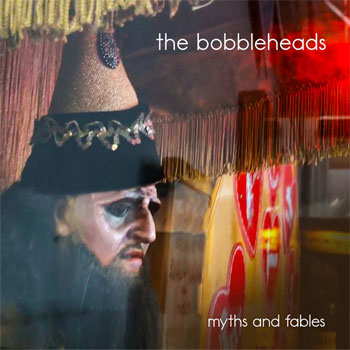 The Bobbleheads – Myths and Fables
There’s probably another word that conveys the texture of an electric Rickenbacker guitar, but until I think of it, chiming is the adjective of choice. And it applies when describing the songs of San Francisco’s Bobbleheads. Clean harmonies, sleek songwriting, sharp hooks, concise melodies: those are some of the characteristics found within the twelve songs found on Myths and Fables. Descending melodies from the Beatles school of songwriting show up here and there, and as a whole this is as unpretentious a clutch of tunes as you could hope to find. These guys aren’t posing in a retro fashion, and they’re not jutting out their chins trying to look tough. They’re also not at all twee. What they are, you’ll be pleased to know, is genuine and straightforward. There’s a bit of sinister riffage in places, but it’s used us a textural element to convey certain sorts of emotion. But those shaded moments are balanced by copious whoa-oh-oh moments that make you want to sing along and windmill that air guitars of yours. The band playfully describes itself as “quirky, quick and mostly queer.” The words “prolific” and “fun” don’t work alliteratively in that context, but they’re that as well. 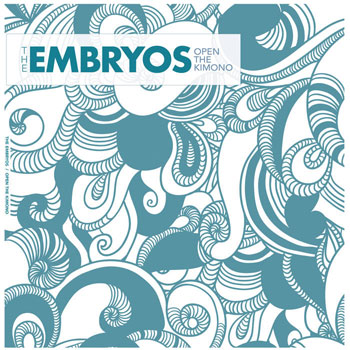 The Embryos – Open the Kimono
I’m going to resist classifying The Embryos as powerpop; there’s more going on in their music than that label might suggest. But fans of that style will find that many of the values they hold dear – melody, hooks, accessibility – are here in great supply. The music has a kind of simmering emotional vibe that suggests Matthew Sweet crossed with, say, Tom Petty. Bits of harmonica tossed into the mix help provide a sonic tether to early ’60s British Invasion styles, but The Embryos don’t follow a retro path. The group’s chosen sonic aesthetic – dry, boxy and reverb-free – suits their songs nicely. When they harmonize as they do on cuts like “Wake Up Screaming,” some listeners may be reminded of the pride of Zion, Illinois: Shoes. Sometimes the band mixes up the jangle with slashing chords, like on “Ghost Dreams, Mainly.” even when the tunes feel upbeat, there’s a melancholy undercurrent, reinforced by titles like “Bad Old Days” (which lifts a melody from Teenage Fanclub) and “The Frightened Few.” Since this album came out a year ago, the group has released a live set and a three-song EP (slated as first in a series). Solid stuff all. 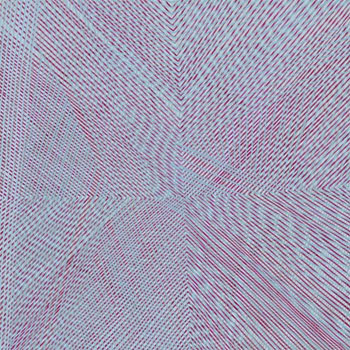 Blue Glass – Pale Mirror
Nobody’s as surprised as me to find that synth pop is a thing in 2019. I had assumed that the style had spent itself completely decades ago. But of course that’s never true of any style of music if it’s done with skill and conviction. This Seattle outfit sounds as if it’s from a dark and rainy part of England circa 1983. The analog synthesizer texture on songs like “Don’t Think Twice” bump up again st a sort of late-period new wave style that owes a debt to Echo and the Bunnymen. The music is moody and melancholy even when it’s insistent, as on “Out of Time,” a song that sounds straight outta Ultravox or Orchestral Manoeuvres in the Dark. But the music on Pale Mirror isn’t all machines; while the percussion is predominantly the product of stiff drum machines, there are wiry and jangly guitar bits sprinkled throughout the songs. And just when you think you’ve got main man Michael Shunk pegged, he delivers a warm slice of Prefab Sprout-meets-Spandau Ballet on “We Loved the Rain.” Blue Glass doesn’t really do much in the way of charting new sonic territor, but working within their chosen idiom, they do fine. 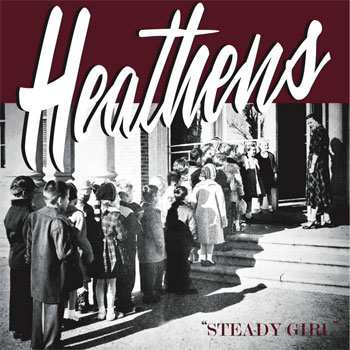 Heathens – “Steady Girl”
The people involved in bringing this archival gem to light are calling it “the first garage rock record ever made.” Cut in 1956 at Sun Studio, this tune was written and recorded by five Memphis teenagers. Unusual for its time, the band included a girl, Kaye Garren, who co-wrote the song and penned the modern-day essay that accompanies the single. The recording is quite professional sounding (fidelity wise, and though the essays explains that the performance was deemed “too raw” for release, to current-day ears it sounds much like the modern primitive style of groups like The Cramps and Tav Falco. The group is pretty loose, yes, but as is so often the case whenever one is speaking of “garage” music, the enthusiasm, verve and spirit more than make up for any technical shortcomings. The song itself is pretty good for a bunch of teens, especially when one considers they didn’t have the whole of rock history to draw upon for their ideas. The sixties’ garage mine has pretty well been stripped (or so we think), but the existence of this tape – two not-terribly-different-from-one-another runthroughs – leads one to wonder what other unheard, raw and primitive gems are out there.