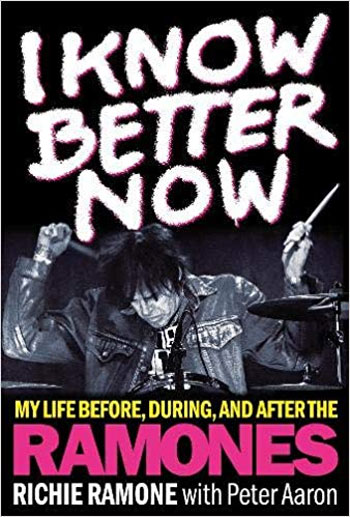 Wait a minute: which one’s Richie? Oh, yeah: he’s one of the few Ramones who’s still alive. All four members of the band’s original lineup – Johnny, Joey, Dee Dee and Tommy – are gone from this place. Joey’s brother Mickey Leigh wrote I Slept With Joey Ramone nearly a decade ago, but that book was as much about his own story (and his brother’s) than the Ramones proper.

Richie Ramone is the drummer who played with the band from 1983 to 1987, a period that included tours for Subterranean Jungle (which he didn’t play on; that was Marky’s last album before being fired) through Halfway to Sanity. The band was still riding high on its earlier successes, though the rot was beginning to set it.

With the help of coauthor Peter Aaron, Richie tells his story with copious candor and humor. He doesn’t paint himself as the hero of situations, but he does let readers know – if they didn’t already – -that Johnny was a hard man to get to know, and often a dour taskmaster uninterested in becoming frineds with someone he considered an employee, not a band mate.

There are many dimensions to Richie’s story that even longtime Ramones fans may find new and revealing; in many ways he seems more a product (and part) of the ‘80s music scene, with interests that didn’t always mesh with his (for our purposes) band mates. His songwriting abilities were generally ignored, though on the rare and few occasions when he was given a chance within the context of the band, the Ramones were better for it.

I Know Better Now’s full title includes the subtitle My Life Before, During and After the Ramones, and while some might think to themselves, “uh-oh: a bunch of chapters covering stuff I don’t care about,” that’s not likely to be the case. Richie’s life in music before and after his Ramones years is every bit as interesting. Recommended not only to Ramones fans but to anyone who wants to know more about the New York rock scene of the 80s as well as before and after.