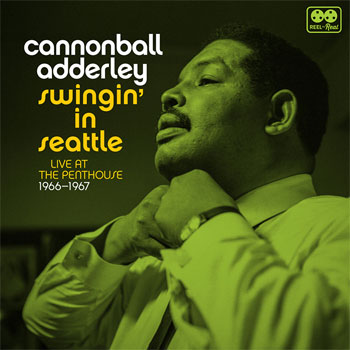 Released today by Reel to Real Records, Swinging’ in Seattle: Live at the Penthouse 1966-1967 represents the first release in a long while of previously-unheard (and previously un-bootlegged) Adderley recordings. I had the honor of writing the liner notes for this album. And I’d like to tell you about why I wrote them, and why I think the album is special.

It wasn’t until the mid 1990s – by which time Cannonball Adderley had been gone nearly two decades – that I discovered his music. I fell in love immediately, and I think that had he known, he would have enjoyed some satisfaction from my awakening.

It was a Saturday morning in late spring, and I was making my regular rounds of local suburban garage sales. The mid 1990s were that peculiar time during which vinyl LPs had fallen out of fashion, yet to be rediscovered by nostalgists or a new generation. Families holding garage sales often didn’t even bring their long-ignored record collections out to the garage; the thought that someone would want them simply didn’t occur to most. 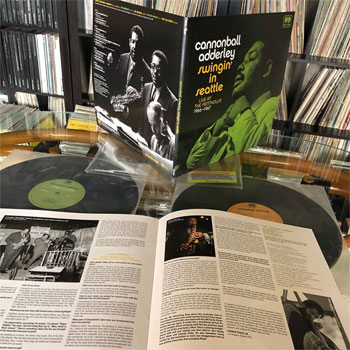 So when I would encounter a sale displaying a certain character, I would gamble on the chance that the family might have a stack of records somewhere in its home. I’d politely inquire, and as often as not, they’d reply in the affirmative. Then they’d invite me into their home and let me cherry-pick through their stack of vinyl. They were typically quite happy to accept a dollar apiece.

It was at one of those encounters where I found an LP housed inside a glossy black cover: Julian “Cannonball” Adderley’s Somethin’ Else, a 1958 album released on prestigious Blue Note Records. I knew next to nothing about jazz, but I figured that a Blue Note album from thirty-odd years prior – and hey, with Miles Davis on it – might be worth a buck, and a half hour of my listening time.

It is no overstatement to say that the record changed my life. His music opened my mind and ears to jazz in a way nothing else had. 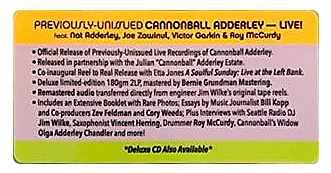 In short order, I learned that Adderley’s musical career took him through a number of phases. He immersed himself in what is now called “world music,” and late in life (he died terribly prematurely at age 46 in 1975) he embarked upon an adventurous foray into fusion. He also created an ambitious (if uneven) work for stage, Big Man: The Legend of John Henry.

For me, riches were to be found on most every Adderley session, from his earliest sides for EmArcy to his final, unfinished work, the posthumously-released Lovers. But as I write in the liner note essay for a new Adderley recording, Swinging’ in Seattle: Live at the Penthouse 1966-1967, “the most fun – and that’s a word that meant a great deal to the man – recordings and performances in Adderley’s deep catalog came during what was also his commercial peak.”

That same Quintet lineup that cut Mercy, Mercy, Mercy! Live at “The Club,” Cannonball in Japan, 74 Miles Away and In Person — Adderley, Adderley, Gaskin, Zawinul and McCurdy — would be captured live by KING-FM radio in Seattle, Washington on at least four dates between early October 1966 and late June of ‘67. The new album Swingin’ in Seattle is drawn from those recordings. 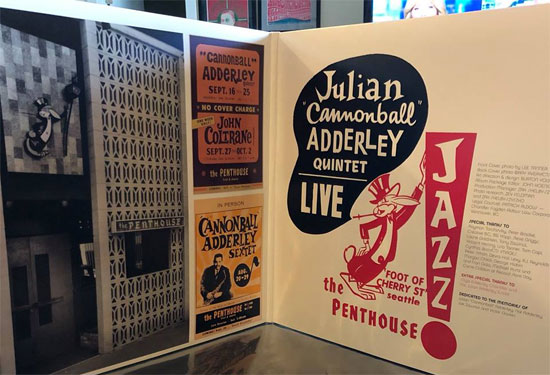 It’s one of the myriad joys of jazz that – in contrast to my first love, rock ‘n’ roll – by its very definition, every performance of a song, even one that’s been performed countless times, can a completely new experience. And so it is that while Adderley fans will have heard these songs before – most have appeared on at least one other previously released album – if you haven’t heard these Seattle recordings, they’ll be new. And each will reveal something that no other recording has.

I’d like to express my deep admiration and appreciation to Zev Feldman and the team at Reel to Real for making this release happen.

Quoting from my liner notes once more: “Julian ‘Cannonball’ Adderley firmly believed that jazz is the music of the people, not some rarefied highbrow music designed for sophisticated audiences. And that’s the beauty of this music: if you let it, it will speak to you and reveal its charms in new and different ways.”