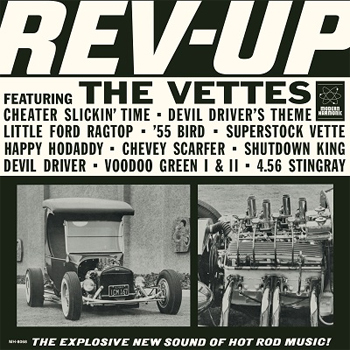 Man, those Wrecking Crew guys and gals were a busy bunch. Of course in their 1960s heyday, the loose studio aggregation wasn’t known by that label – ace bassist (and guitarist) Carol Kaye argues the name is a later-day Hal Blaine invention – and in fact their were rarely if ever credited on the records they made. They helped create Pet Sounds, for example, got their union scale and moved onto the next project.

In 1962, Steve Douglas and Nick Venet hired the crew for a quickie project on MGM Records, one that latched onto the popular trend of exploitation releases. Rev-up Featuring the Vettes is a cash-in on the hot rodding craze of the era, circa January 1964. (Leon Russell was at the helm for a similar effort featuring a young Keith Allison; that record – not yet reissued – shamelessly cast a wider net as evidenced by its breathless title: Liverpool! Dragsters!! Cycles!!! & Surfing!!!!

Russell’s album was credited to The Eliminators, a group that wasn’t a group at all, just like the Vettes weren’t. For this date, one Bruce Johnston took the vocal spot on five cuts; you may recognize his name. He’s been in the Beach Boys since 1965, at which time he replaced Glen Campbell, who in turn had replaced Brian Wilson in the touring lineup.

How could it not be good? The songs are throwaways, with trendy titles like “Happy Hodaddy (with Ragtop Caddy)” and “Superstock Vette,” and the lengthiest cut among the dozen tracks is “Devil Driver” at an epic 2:35. The songs are very much in the vein of the Beach Boys’ car-themed tunes, with bits of Jan and Dean thrown in for good measure. Sound effects abound. The overall effect on tunes like “Little Ford Ragtop” is quite like fictional group Cap’n Geech and the Shrimp Shack Shooters from the Tom Hanks film That Thing You Do! Some of the vocals are goofy, but the playing – especially by Campbell and Tedeseco – is always appealing and often inventive.

The folks at Modern Harmonic clearly had a bit of fun with this one: the translucent vinyl is described in its press materials as “wiper fluid blue.” Short of essential unless you’re a Wrecking Crew completist (there’s a scary thought), Rev-up Featuring the Vettes is still a heckuva lot of fun.