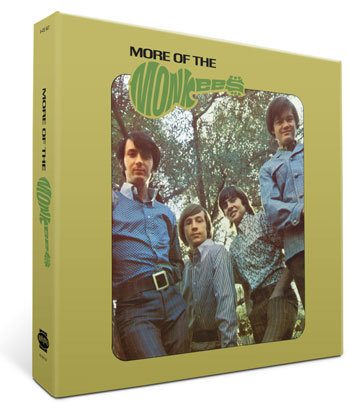 Too often the Monkees have been dismissed, and called names like the Prefab Four. While it’s undeniable that the group was assembled by music and television executives looking to capitalize upon the popularity of the Beatles, the Monkees were certainly not the only rock/pop act of that era to be put together by behind-the-scenes figures: Moby Grape had a similar origin.

And while the band wasn’t give the opportunity to do much on their albums beyond singing (the exception being singer/songwriter Mike Nesmith), the first Monkees album was an exemplar of the kind of approach used in the pre-Beatles era: a stable of reliable songwriters crafted material, a group of uncredited studio musicians cut the music, and the “faces” of the act recorded the vocals. The Monkees benefited from a top-notch staff of writers, most notably on their first release producer/songwriting duo Tommy Boyce and Bobby Hart.

Building upon and expanding the popularity of The Monkees weekly television comedy, that first LP yielded several hits, and as the story goes, the band members only found out about their second album, More of the Monkees, when they saw it on record store shelves. That second album was largely compiled using outtakes and leftover material from the debut album sessions. On the face of it, then, one might expect More of the Monkees to be an inferior album.

More of the Monkees sold in vast quantities; it was the top-selling album in the United States for 1967, the first pop/rock album to earn that designation. And while reviews of the day in magazines such as Rolling Stone sniffed at the record, panning it, time has shown the Monkees’ sophomore album to be a thing of some considerable quality. In acknowledgment of that fact, and in (slightly belated) celebration of the record’s 50th anniversary, Rhino has assembled 3CD boxed set reissue of More of the Monkees.

The first disc in the set presents the original album, first in monaural and then again in stereo sound. The mixes are often quite different form one to the other. Eight outtakes from the sessions round out the first disc, including a mono mix of the thin “Last Train to Clarksville” rewrite “Tear Drop City.” That track would appear in stereo on a late-period Monkees album, 1969’s Instant Replay. Three previously-unreleased tracks are among the bonus material on the disc, including a mono mix of “Look Out (Here Comes Tomorrow).” 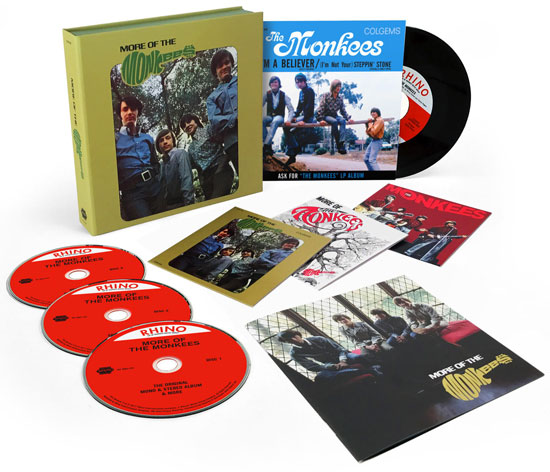 The second disc on the expanded reissue of More of the Monkees features a treasure of rare and previously-unheard material. Nearly all of the disc’s 32 tracks are presented for the first time. A number of TV mixes are included; one is Nesmith’s brief, faux-impromptu solo reading of his original “Different Drum.” Another is the songlet “I Love You Really,” featuring Davy Jones and previously heard only on the audio track of a Monkees TV episode. Multiple outtake versions of songs from the period are here as well, including “I Don’t think You Know Me,” quite possibly the greatest among the band’s little-known songs. All but the hardest of hardcore Monkees fans will be able to live without multiple versions of “Your Auntie Grizelda,” but there are quite a few gems on the second disc.

Disc three digs even deeper into the session for More of the Monkees, presenting early attempts of some of its tunes, alternate vocal tracks, and the entirety of a 1967 concert in Arizona, featuring the four Monkees backed on some numbers by an auxiliary band that featured Bobby Hart on organ.

The lovely packaging for the 3CD set also contains a booklet providing detailed track information (who played on what, and when) along with a four-color reproduction of the original November 1966 45rpm single “I’m a Believer” b/w “(I’m Not Your) Steppin’ Stone.”

2014 saw the release of a 3CD “super deluxe” reissue of The Monkees, and the band’s third album was chronicled in detail on the 3CD release from 2000, The Headquarters Sessions. 2007 also saw the release of a 2CD deluxe version of the Monkees’ fourth LP, Pisces, Aquarius, Capricorn & Jones Ltd. Later labums including Head (1968) and even Instant Replay and The Monkees Present (both 1969) have also been released, leaving only Changes (which featured only Micky Dolenz and Davy Jones) not receiving an exhaustive expanded reissue. That notwithstanding, this new 3CD set of More of the Monkees brings the exploration of the Monkees ‘ recordings full circle.