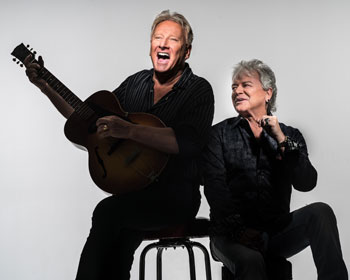 Air Supply was one of the biggest-selling acts of the 1980s. With a long string of smash hits – a staggering ten consecutive Top 40 singles – the Australia-based band satisfied the listening public’s craving for tuneful, romantic pop. And when the duo of Graham Russell (guitar, vocals and songwriting) and lead singer Russell Hitchcock got the band together in 1975, neither suspected they’d still be touring worldwide and making new music more than four decades later.

Russell and Hitchcock first met as cast members of the Australian production of Jesus Christ Superstar. “We put a record out while we were still in the cast,” says Russell. “It went to number one in Australia, but nobody knew who we were!”

Breaking through in the U.S. was a goal from the start, and Air Supply got a boost from none other than singer Rod Stewart. In those days, it was customary for internationally-touring artists visiting Australia to feature an Australian opening act. Riding high on the success of its 1976 self-titled debut, Air Supply scored a gig opening for Stewart. Russell recalls the singer’s greeting backstage after their first show: “Hey guys, great job. I want you to open for me in the U.S. next year.”

That tour helped grow a stateside fan base for Air Supply. But it was 1980’s “Lost in Love” that truly broke the band in the U.S. The track soared to the top spot on the singles charts, and a succession of similarly-themed singles (“All Out of Love,” “Every Woman in the World,” “The One That You Love, “Young Love,” “Making Love Out of Nothing at All” and several others) helped propel four of Air Supply’s albums to Platinum or multi-Platinum status.

“You couldn’t turn a radio on without hearing Air Supply,” Russell says without a hint of boastfulness. He notes that the band was prepared for success. “But we had a lot of luck too: the universe was with us every step of the way.” His secret to that success is simple. “We were tenacious. And we were always nice to everyone on the way up.”

It’s fitting that Air Supply’s new album – the band’s 25th – was released on February 14th, Valentine’s Day. “People go to a show to hear hit songs,” Russell admits. “But we’ve always included new ones, too. And in the end they love those just as much as the old ones.”