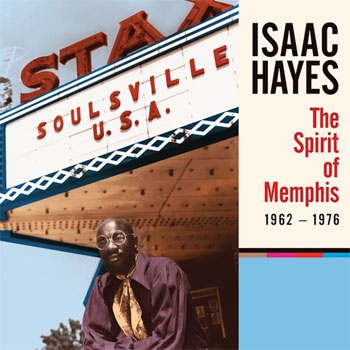 Isaac Hayes was the man. Certainly, he developed an outsized public persona, with his bare chest, furry boots, wide-brimmed hat, chains and gold-played Cadillac (though not all at the same time), and that persona was as cocksure and swaggering as the description suggests. But the thing is, he earned it. From his days as a staff songwriter to his blockbuster status as the face of soul music in the 70s (and specifically of brilliant but ill-fated Stax Records) Isaac Hayes was a star.

There have been career retrospectives of the man’s work before; one of my earliest reviews in print is a quick look at Ultimate Isaac Hayes: Can You Dig It?, a 2CD set from a decade ago. But even that set focused only on (a) Hayes’ own work under his own name and (b) previously-released material. The Spirit of Memphis takes a much wider – and thus more accurate – perspective.

A sprawling, 4cd set housed in a hardcover book, The Spirit of Memphis smartly categorized Hayes’ work into four sections, devoting one disc each. The first is subtitled Soul Songwriter, Soul Producer, and features sides that found Hayes working behind the scenes. Though in retrospect (and in this context) his fingerprints are all over these tracks, they were credited to the vocalists: Carla Thomas, frequent partner David Porter, Booker T & the MGs, Mable John, the Mad Lads, Johnnie Taylor. All 26 cuts are held together conceptually by Hayes’ skills and involvement. A real find is the rarely-heard, late-period Billy Eckstine side, a cover of “Stormy.” And country star Charlie Rich is here too, illustrating – if it needed pointing out – that Hayes’ talents transcended genre.

The second disc collects Hayes’ single releases on the Stax-associated Volt and Enterprise labels; most of these are credited to him alone, with a few collaborations with Porter. You’ve heard many of these, but it’s nice to have them here in their short single edits. Even the earlier singles hint at the directions Hayes would soon pursue. A pair of radio spots are amusing in a time-capsule sort of way. 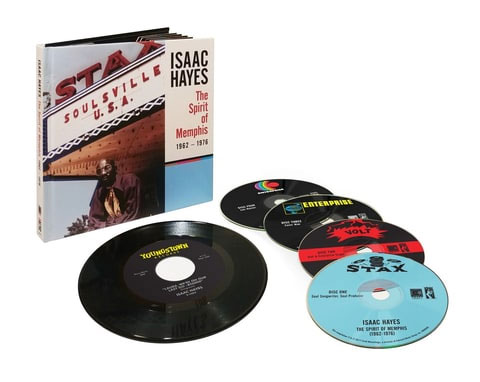 The third CD, Cover Man, vividly illustrates Hayes’ prowess as one of music’s finest – and most inventive – interpreter of the works of others. His own abilities as a songwriter, arranger and producer no doubt honed his ability to take the work of others – Jimmy Webb, Burt Bacharach – and truly make it his own. A live set form Operation PUSH in 1972 rounds out the disc; half of the material is previously unreleased. Hayes’ reading of “Stormy Monday” is a thing to behold.

If you love Hayes’ work, you’ll love the fourth and final disc, Jam Master. (If you find him hopelessly self-indulgent and overwrought, you’ll hate it.) All but “Ike’s Mood I” and “Do Your Thing” are unreleased, and the seven tunes fill an entire CD. But for the initiated, ultra-extended readings of “Ain’t No Sunshine” and “You’ve Made Me So Very Happy” are treasures.

The lovingly-compiled set features wonderful color images and liner notes, and the package is roughly the dimensions of a stack of 7” singles. In fact, the set includes a 45rpm single too, a reproduction of Hayes’ first single on the tiny Youngstown Records.

Because of its nature, The Spirit of Memphis is essential for Hayes fans, but it’s well worth hearing for those new to his work. And thanks to its focus on material outside his official catalog, you’ll still need all of his Stax-era releases as well.