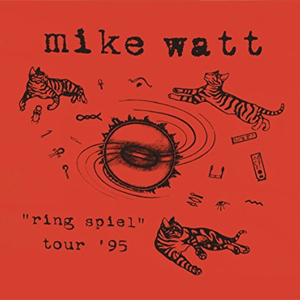 File next to: Meat Puppets, Mission of Burma, Sugar

Gravelly-voiced bassist Watt first made his name as the bassist in The Minutemen, and after that group’s end in the wake of D. Boon‘s untimely death, with Firehose. Eventually he embarked on a solo career; his first solo tour – in support of 1995’s Ball-Hog or Tugboat? – featured an unnamed all-star band backing him as he sang and played his thunderous bass lines. The archival release “Ring Spiel” Tour ’95 documents a show from that tour. The band includes Eddie Vedder (Pearl Jam), Dave Grohl (Nirvana, Foo Fighters), Pat Smear (The Germs) and William Goldsmith (Sunny Day Real Estate). Despite that heavyweight backing, Ring Spiel is completely Watt’s show. The set list – drawing mostly from Ball-Hog or Tugboat? – feature Watt’s trebly-yet-roaring electric bass at the center of most of the songs. Left-field covers (Madonna, Blue Öyster Cult) only add to the fun.