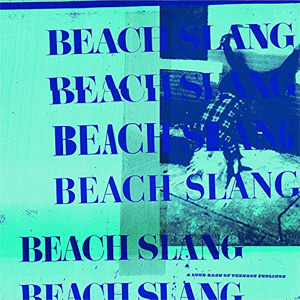 File next to: Replacements, Paul Westerberg

One one level, there’s nothing wrong with wearing one’s influences proudly; just be sure not to lose your individuality in the process. The very existence of Beach Slang – purveyors of high-octane punk-flavored rock with no end of memorable hooks – does force the question: does the world really need two Replacements? More than a few times on A Loud Bash of Teenage Feelings, the trio steps over the line into overt stylistic appropriation: there’s little about “Spin the Dial” that suggests it’s anything other than an attempt to copy every musical quality that made the ‘Mats so beloved. And “Punks in a Disco Bar” would have fit in nicely on Paul Westerberg’s 13 Songs. It’s hard to take issue with their musical quality, but Beach Slang should assert some of its own personality – assuming such a thing exists – into the proceedings.