A Conversation with Sonny Rollins, Part 2

Bill Kopp: To your knowledge, have pieces from your back catalog been sampled by hip hop artists? Do you get compensated for that?

Sonny Rollins: I have had some songs being sampled but I don’t get any … I don’t know if it’s a large amount and if it produces any really recognizable stream of money. But some guys have. 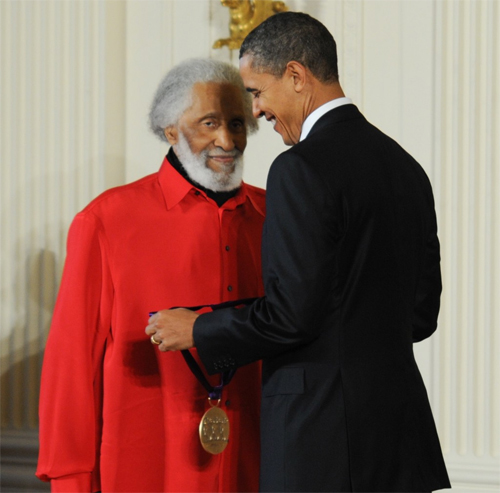 BK: Among people who don’t “get” jazz, there is an argument that it can be inaccessible. I didn’t begin to appreciate jazz until well into my adulthood; my point of entry was Cannonball Adderley. Not to compare him to you or vice-versa, but one thing that you both share is an appreciation for a strong melodic line. From my perspective your music has always been rooted in what – in rock and pop and pretty much all genres – is called a hook.

Even when many of your contemporaries were going in a more, shall we say, abstract direction – and here I’m thinking of some of Miles Davis‘ work, and Ornette Coleman – you made music that was somehow both ambitious and accessible. Is it by design or default that your music has such a strong melodic sense?

SR: I think it’s by the way things worked out. As a kid I was much influenced by one of my favorite people, Fats Waller. I heard a lot of that music. I was born in Harlem, surrounded by a lot of melodic music. Louis Armstrong, all of those people, I consider them melodic music, yet they had the jazz tinge. I just consider myself that type of a player.

My early influences were people like Louis Jordan, the great rhythm and blues player. I used to get everything he made. And this was like, when I was 7 or 8 years old.

I think that you are correct. Some of my contemporaries might have a different style of playing. I might have thought [at one time] “Hey, I’m not really in the groove, but then these guys all like my playing.” Coltrane and Ornette Colman, all those guys whose playing could be considered more “outside,” they all were very big fans of mine.

I guess, even though my repertoire – in the large sense I’ll use that word – might be something which is melodic, it has the jazz element to it. The surprise that is emphasized in jazz, it has that to it. So that’s who I am. I love melodies. I used to go the movies a lot when I was a kid. Every week there was a new movie. It was way before television. So I heard a lot of the American Songbook. As a child I heard the Grand Old Opry. But I loved melodies, you know? I love Stevie Wonder when I hear some of his songs. So … guilty!

BK: You mentioned Louis Jordan. When I talk to my friends who are mostly into rock music, I say, “you’ve got to listen to this guy,” because I think he is as important to the development of rock and R&B as all of the people who are normally associated with that: Fats Domino, Elvis, Jerry Lee Lewis, and people like that. I think he deserves to be mentioned in the same breath, even though he wasn’t going for the same thing. I hear that in his music.

BK: Recently, a good friend of mine gave me a gift. It’s a coffee table book called New York Hot – East Coast Jazz of the 1950s and ’60s. What it is, really, is a book full of notable album cover reproductions, just great album cover art. One thing that is so remarkable about the book is just how many of those records are Sonny Rollins titles. Back in the day, did you get involved in any way with things like album titles, album art and packaging, or was that completely the realm of others?

SR: That was out of my hands, completely. Back in the day, we just came into the picture as artists and musicians. I can’t speak for everybody, but I think most of the guys just did the music, and then there were other departments which handed the designs of the covers and everything.

BK: I would say that with the benefit of hindsight, in that regard anyway, I think you were perhaps better served than a lot of your contemporaries. Because some of those album covers are just wonderful. It’s wholly separate from the music, but they’re nice to look at, too. 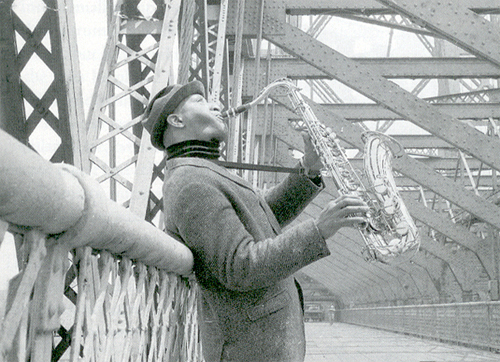 SR: I agree. I agree! That’s one thing we lost with the advent of CDs. We’ve lost the big album covers because the CD, even though it’s the same picture, is not as attractive. It does not look like art. These album covers are pieces of artwork.

BK: And it has gotten even more so now, with things going to digital. There is no longer anything you even hold in your hand; it’s just files.

SR: Yeah. But you know, it is funny you say that. You know, of course, that they are coming out with vinyl now. And I just got a few copies of Holding the Stage on vinyl. And so the albums look more like a work of art than the CD did. I guess now with the files and all that you don’t even get a picture. With this vinyl production, it really looks like the old days with nice artwork.

BK: Both of my kids, who are both in their 20s, have fairly extensive vinyl collections. A lot of times they will go to concerts, and there will be a merch table in the back of the room where you can buy a t-shirt or whatever, and they will buy vinyl of new recordings. Neither one of them owns a single CD; they only have vinyl. I don’t think records are ever going to be the primary physical format again, but I think vinyl is back in a way that we might not have …