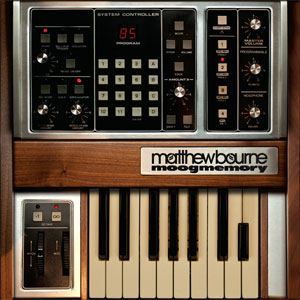 File next to: Philip Glass, Orchestral Manoeuvres in the Dark, Brian Eno

The Memorymoog was the last synthesizer produced by Moog Music during the original company’s run; while a deeply versatile and expressive instrument, its complex inner workings made it highly unreliable, and that contributed both to the damaging of Moog’s reputation and to the company’s 1986 bankruptcy (Dr. Bob Moog later founded a second Moog Music that is quite successful). Nominally a jazz musician, Matthew Bourne moved into more avant-garde and electronic sounds more than a decade ago. His third album, moogmemory, was realized solely on a retrofitted Memorymoog. The album is far less experimental than one might suspect, and the results are fascinating: soothing yet intriguing (and often surprisingly melodic) melodies that have the feel of Brian Eno’s Another Green World-era instrumentals, albeit without a rock aesthetic.