Brian Eno’s “Illustrated Talk” was a separately-ticketed event; Moogfest pass holders got first dibs on tickets (and a reduced price). Clearly hoping to avoid recriminations later, the promoters went to great lengths to let people know that Eno would not be playing music at this event (nor at his also-separately-ticketed “77 Million Paintings” installation at the YMI).

No matter: music or no, the Eno event was worth whatever pricetag AC Entertainment hung on it. Dressed “business casual,” the unassuming Eno took to the stage right on time (after a brief intro by AC head Ashley Capps, clearly jazzed at the opportunity to introduce a hero of his). Eno was surprisingly self-effacing, quickly making it clear why pretty much anyone who’s ever worked with him (in his capacities as producer and/or collaborator) has nothing but praise for the man. 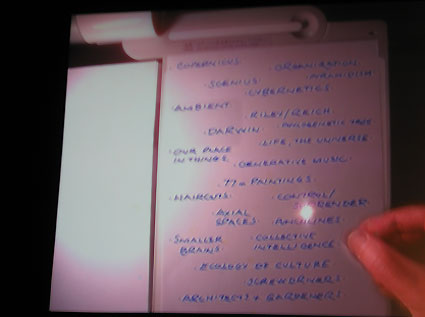 For someone so closely associated with technology and experimentation, Eno is refreshingly humanistic in his approach and worldview. At the risk of inaccurately paraphrasing him – Eno is nothing if not precisely articulate, though he’d almost certainly argue otherwise – technology is merely a tool of creative expression. Far from being a technocrat, Eno is a champion of the creative process, and seems to believe that the potential to create great things lies within everyone.

Throughout his two-hour talk, Eno presented overhead transparencies featuring endearingly crude hand drawings. These helped reinforce the points he was making, and did so in the most unpretentious manner possible. After the talk, I heard or read (I can’t recall which: so much info had found its way into my head, I was happily suffering overload) someone suggest that Eno’s presentation was professorial. Nothing could be farther from the truth: like his music, the talk was warm and wholly human-centered. 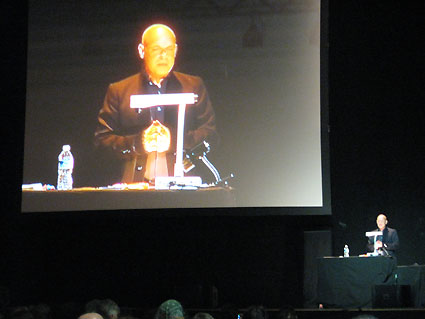 Eno has a knack for demystifying things that would otherwise seem complicated. With the aid of another illustration, he gave a quick explanation of the concept/mechanics behind Terry Riley’s “In C,” elucidating the piece in a concise manner. Eno explained why no two performances of “In C” are ever the same, and used that idea to move into a discussion of the relationship(s) between composer, performer and the audience. 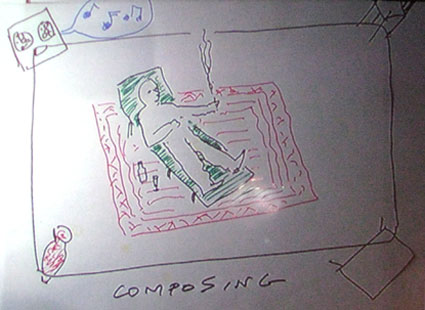 With excellent delivery and timing, Eno showed that he has quite a sharp sense of humor, often making little jokey asides at his own expense. And he made a point of offering a pair of endorsements: one for local Asheville record shop Harvest Records (paraphrase: “They don’t stock all records, just the good ones”) and another for – of all things — a hardcore pornography site. Of the latter, it was truly to make a valid point about creativity.

I have a stack of Eno records – including his 1970s “pop trilogy,” some of the ambient discs, and his collaborations with Robert Fripp – and I’ve enjoyed them for years now. But after hearing and seeing Eno talk, I am sure that I will hear all of his work in a substantially different way. Moogfest may have been (nominally) a music festival, but Eno’s “Illustrated Talk” was a major highlight.

Next: Hans-Joachim Roedelius (again), Terry & Gyan Riley, and The Flaming Lips. And more after that!