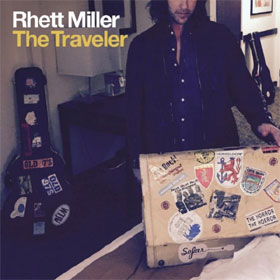 In his role as guitarist and lead vocalist of Old 97s, Rhett Miller has been at the modern-day vanguard of successful rock/country cross-fertilization. His solo career dates back even farther than Old 97s’ debut, and while he put solo efforts on hold for most of that band’s first decade, he resumed his solo career in 2002. The Traveler is Miller’s seventh album. The Traveler doesn’t represent a major shift in musical emphasis; while album’s arrangement choices mean that a track like “Jules” features a string section that will remind listeners of Out of Time-era R.E.M. (specifically “Losing My Religion”), Miller’s straightforward songwriting always keeps the melodic quotient high. His breezy, laconic vocal delivery has a genuine (but not overly earnest) quality that makes listeners stop and pay attention to what he’s singing about. And nobody combines c&w’s musical virtues with glam-rock quite like Miller does on “Most in the Summertime.”