Beatles vs. Rolling Stones: Another Round 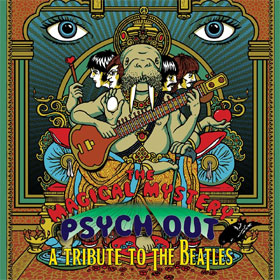 Back when I was a kid, the Beatles-or-Stones question was a real thing: among my childhood peers, one had to pick a side. That one could like both groups was, it seems, not a concept around which we could wrap our minds.

These days I’m much older and slightly wiser, and I enjoy both (Beatles still win by a long shot if I must pick). The folks at Cleopatra Records agree, as do the roster of acts whom they’ve employed to help create a pair of tribute albums (the label’s specialty). Magical Mystery Psych-out: A Tribute to The Beatles and Stoned: A Psych Tribute to The Rollings Stones bring together a cross-section of modern psych (and/or psych influenced) bands.

Of the two, the Beatles tribute disc plays it safer track-wise. Most of the songs on that disc are covers of material The Beatles cut in the Rubber Soul, Revolver and White Album eras. And the one outlier – “And I Love Her” – is given a relatively straight, faithful reading by The Lucid Dream. They keep the jangling guitar largely intact, and give the tune an arrangement somewhat reminiscent of what Best Coast might do. (A note-for-note copy of George Harrison’s guitar solo is a nice reminder that sometimes simplicity is the best approach. Electric Moon‘s reading of “Tomorrow Never Knows” sounds a lot like how one might expect The Brian Jonestown Massacre to cover it (though BJM’s vocals are better than the weedy vox on this version).

While other psych tributes from Cleopatra enlisted the help of a few “name” acts (Allah-Las, for example) Magical Mystery Psych-out features groups who will be familiar only to the hardest of hardcore modern-psych aficionados.

A few of the featured bands on this set are clearly not intimidated by the massive popularity of The Beatles; maybe it’s because they’re young and have less reverence (which is a good thing in this case), but The Vacant Lots‘ “Julia” creates an arrangement that owes nearly nothing to the 1968 original. Kudos to them for thinking outside the box. The same can be said about The Ruby Sun‘s cover of “Martha My Dear,” though in this case they win on originality but lose on musicality; the dirge-like pace of their arrangement might make some listeners grind their teeth. The Underground Youth‘s trip-hop reinvention of “Come Together” is a curio if nothing else. Kikagaku‘s “Helter Skelter” is a eardrum-splitting, punishing noisefest that makes the original sound like ear candy. And Strangers Family Band‘s “Sun Kings” is evocative of nothing so much as the still unattributed not-Beatles bootleg outtake, “Candle Burns.” 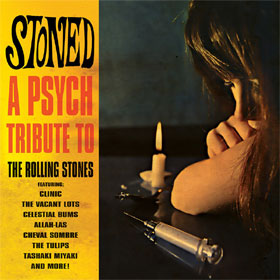 At least musicwise, The Rolling Stones’ psychedelic period lasted for all of one album, Their Satanic Majesties Request. But on the psych tribute to the band, tunes from all through the Stones’ catalog are given the treatment. A highlight of the set is The KVB‘s cover of “Sympathy for the Devil.” Instead of building an arrangement around a familiar riff, they strip the tune down to its basic parts, rebuilding it in a hazy, gaudy manner that recalls The Psychedleic Furs or any number of 90s shoegaze bands. Well done.

Shiny Darkly‘s “Under My Thumb” is close to the original (if the original was recorded in an airplane hangar with squalls of echo and feedback). Yeti Lane‘s “Sway” is appealing in a zonked-out way. Clinic‘s drum-machine-led reading of “It’s Only Rock & Roll (But I Like It)” sounds like Trio (“Da Da Da”), and doesn’t really work, but like some of the acts mentioned on the Beatles tribute, they score for originality if nothing else.

Sons of Hippies play it straight on “Gimme Shelter,” which raises an interesting question: on a tribute album, is it better to copy the original or reinvent it? Their reading of the classic Stones tune is just about the best thing on the pair of albums.

Surprisingly, The Allah-Las‘ version of “Stoned” is perfunctory; the certainly can do better. Pink Velvet‘s “(I Can’t Get No) Satisfaction” is a slavish copy of the original, albeit one with the lead vocal bumped up an octave. But Pure X‘s reading of “Beast of Burden” is interesting and nicely textured, a sort of cross between indie rock and Martin Denny‘s bachelor pad tropicalia.

Like most albums of their ilk, this pair of releases aren’t likely to end up in most listeners’ heavy rotation, but they’re both reasonably well done. Thanks to somewhat more adventurous song selection, in this Beatles-vs.-Stones round, the decision goes to The Rolling Stones.