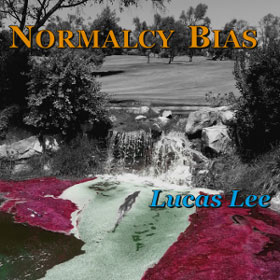 Some of those progressive drummers really get around; it seems as if Pat Mastelotto and Marco Minnemann are everywhere, and that they always involve themselves with fascinating projects. Pat’s the drummer here, but multi-instrumentalist Lucas Lee is the star of the show. He’s as skilled on classically-tinged piano as he is on menacingly distorted prog-metal guitar. The melodies are strong here, and the vocals (from the spoken news-chyron-esque “Justice Injustice” to the more conventional bits of singing on the remaining tracks) add a narrative element full of fear and paranoia to this mostly instrumental offering. It’s accessible without sacrificing ambition.