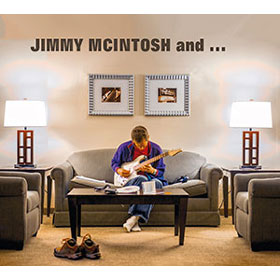 Jimmy McIntosh – Jimmy McIntosh And…
A decidedly original concept is at work here. McIntosh is a journeyman guitarist who, for the last several years, has been working within the context of Broadway shows and the like (those guys are noting if not versatile). The concept here is to pair the guitarist with his heroes on various tunes. So with a backing group that includes some seasoned and in-demand sessioners, he’s joined – on some, but not all tracks – by Ron Wood (Faces, Rolling Stones), John Scofield (Miles Davis et.al.) and Mike Stern (Miles Davis again, and others). Ivan Neville helps out on organ, too.