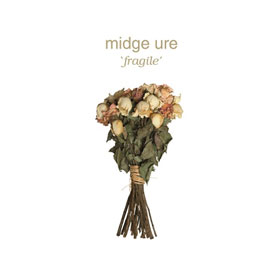 In my last review, I took a look at a new release from Colin Hay, an artist who came to prominence in the early 1980s with his group Men at Work. His latest album revisits the songs of those days, but not the sound. Today I’m focusing on another artist who first broke out in that same era; his new album features almost the opposite approach.

Like Colin Hay, Midge Ure was born in Scotland. But he remained in the UK for his musical career: his first musical endeavor of note (and historical importance) was as a member of Rich Kids, the 1977 group that also featured ex-Sex Pistols bassist Glen Matlock (aka The One Who Actually Knew How to Play). After that, of all things, he ended up replacing Gary Moore on guitar in Thin Lizzy.

Ure’s next ventures were the ones with which most people associate him: first, he rose to fame as guitarist and lead singer of Ultravox (most notably on their worldwide hit, “Vienna”). Next, in cooperation with cohort Bob Geldof (formerly of Boomtown Rats, later Sir Bob), he organized three musical mega-ventures: Band Aid‘s “Do They Know It’s Christmas” (which Ure wrote), the 1985 Live Aid concert extravaganza, and the 2005 Live 8 shows (during which classic-lineup Pink Floyd appeared in their only post-The Wall reunion). Ure also scored a UK #1 single with his solo cut, “If I Was,” in 1985.

That song appeared on Ure’s solo debut, The Gift. He followed that album up with other solo discs every few years, but the time between new releases seemed to get longer with each release. Not counting some expanded repackaged reissues and an all-covers disc, the most recent music from Midge Ure had been 2001’s Move Me.

In 2014, Ure finally got ’round to a new disc, Fragile. The new album – available on vinyl – has already charted respectably (#66) in the UK, but hasn’t done so Stateside. That’s a shame, actually, because Fragile is quite good. All of the songs are new (well, as in, we haven’t heard them prior to now), but Ure’s sonic palette has a decidedly 80s sheen about it.

Ultravox’s sound might be described as a deft mix of cold, bloodless synth work and melodrama; those seemingly opposite qualities somehow worked splendidly when combined, creating a grandeur and elegance rarely matched by other synth-centric groups of its era. (Human League, for example, never did anything with the wide sweep of “Vienna.”)

And it’s that sound – or an updated rethinking of it – which forms the sonic tableau of Fragile. Ure’s voice alternates between a yearning, impassioned, keening approach (“Are We Connected”) and a near-whisper (“Let it Rise”). If you can imagine a more emotionally-based, much less angry version of Gary Numan, that’s close to what Ure sounds like on Fragile. He plays all of the instruments, save a bit of drum sampling and keyboard work (the latter by Moby).

As strong and compelling as Ure’s voice is throughout, it’s the seven-minute-plus “Wire and Wood” that is the highlight of Fragile. Ure’s multilayered instrumental approach folds in all sort of goodies: nylon string guitar, crystalline acoustic piano, tympani, analog-sounding synth pads, even what sounds like a just-slightly (as it should be) out of tune Mellotron.

Fragile rarely rocks, and rocking isn’t its goal. Instead it’s a collection of ten floating, shimmering melodies that highlight Ure’s wide array of talents: singing, composing, playing, and arranging. “Become” is a bit reminiscent of The Dream Academy, moved along with a throbbing synth line that makes good use of the stereo spectrum. And on “Star Crossed,” Ure combines the synthy sound of Ultravox with some roaring, 70s-styled sustained guitar, and even a bit of surprise-it’s-not-annoying vocal effect work.

The lovely vinyl package includes a lyric sheet – remember those? – that also sports a brief note from Ure more or less apologizing for (or at least seeking to explain) the long wait between his last disc and Fragile. A really nice black-and-white 12×12 photo insert is a bonus; my copy didn’t include a download card.

On Fragile, Ure conjures the vibe of his music of thirty years past, but he does so in a way that sounds wholly modern. File Fragile right next to Zero 7‘s 2001 classic Simple Things in the make-out music section of your collection.