I’ve long been a fan of what is sometimes labeled “kiwi pop,” the jangly guitar-based music – mostly made by a very interconnected community of musicians – that began in 1980s New Zealand. The Chills, Toy Love and Tall Dwarfs are a few of the better-known (a relative term!) exponents of the style. The Clean is another; guitarist David Kilgour was/is a member of both The Chills and The Clean. A North American performance by any of these bands is a true rarity, and the Transfigurations II organizers chalked up a serious score in bringing The Clean to North Carolina. As the band began their set on the outdoor stage, it was clear that the crowd was in for some long (but not meandering) guitar-solo based readings of songs from the group’s catalog. 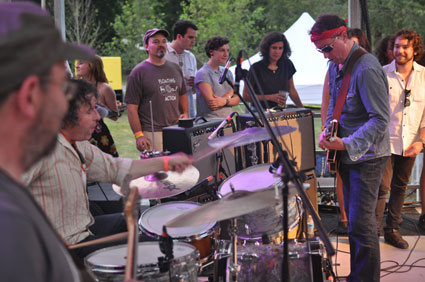 A few songs in, Kilgour addressed the crowd: “We’re having fun up here, but we’d be having more fun if you were up here with us.” A couple dozen of us took his statement literally, and climbed up onto the stage. Camera in hand, I stayed safely off to one side, no more than two or three feet from the group’s bassist (and his loud’n’large speaker cabinet). With fans crowding around them, the trio played the remainder of their set, clearly energized by the onstage activity.

Once The Clean concluded their set, I grabbed some food and (another) local beer and headed back to the gymnasium to see and hear Reigning Sound. The group, headed by former Goner Records (Memphis) owner Greg Cartwright, became a nominally Asheville-based group when Cartwright moved here several years ago. The lineup of the band has changed since then: only keyboardist Dave Amels remains with Cartwright. But the changes have arguably resulted in a more cohesive unit: the vocal support behind Cartwright is much stronger now, and the current players have a much better feel for the r&b-inflected garage-rock aesthetic that remains at the center of Cartwright’s songs. 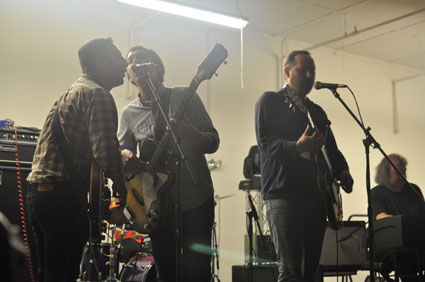 Oddly, though it had long since gotten dark outside, Reigning Sound chose to perform with the stage’s (fluorescent) ceiling lights left on, not making use of the colored/ambient lighting at all. This gave the whole affair a vibe much closer to what one might have experienced in the mid 1960s, when your favorite local garage band played a teen dance. The result didn’t do wonders for my ability to get decent photos, though.

Speaking of Dave Amels, I met him after Reigning Sound’s set ended; he was outside near the outdoor stage, waiting for Lee Fields & the Expressions to come on. I introduced myself and told him that I’m a big fan of a (relatively obscure) album he did back in 2002, a holiday-themed record called Christmas in Memphis. Smithereens drummer Dennis Diken (who plays on the disc) had given me a copy of the CD back in 2009. The theme of the all-instrumental record is straightforward yet quite inspired: versions of Christmas songs (hymns and pop tunes) rendered in a style that sounds like one or more Memphis-based groups. So you’ve got tunes that sound like Booker T & the MG’s, The Box Tops, and so on. Listening to Christmas in Memphis can be a fun spot-the-reference game, and it’s a great record on any level. In addition to project coordinators Amels and Diken (who bill themselves as Husky Team), the list of players reads like a who’s-who of under-appreciated pop musicians: both R. Stevie Moore and Richard X. Heyman are featured (on bass and keys/guitar, respectively).

Amels told me that he’d very much like to reissue Christmas in Memphis on vinyl for the holiday season, but that owing to the resurgence in vinyl (coupled with the limited capacity of existing pressing plants), a 2014 release doesn’t look likely. But it’s worth keeping a lookout for; meanwhile, at press time a total of sixteen copies (including one new copy) are available on Amazon. 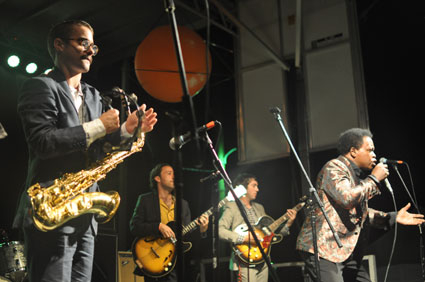 But I digress. Lee Fields took the stage around 10:30pm, and thrilled the crowd with his Stax/Volt Revue styled r&b. Fields worked the crowd like a pro, involving us in call-and-response routines, and delivering his original songs (mostly from his latest album) in the most heartfelt, emotive, passionate manner possible. He even did a bit of the old James Brown leave-and-then-reluctantly-come-back bit, but somehow that old performance trope felt fresh and new in the masterful hands of Fields. In 2014 there are quite a few acts reaching back to classic soul for inspiration and/or material (Sharon Jones, Mayer Hawthorne, Charles Bradley, Fitz & the Tantrums, etc.) but Fields tops the list. 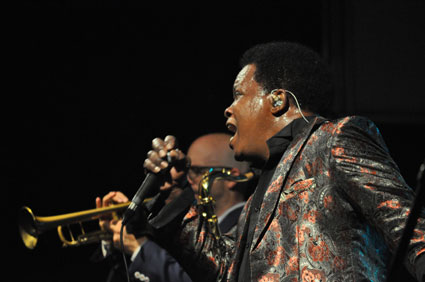 Earlier in the evening, Transfigurations II co-organizer Marc Capon of Harvest Records addressed the crowd, thanking us all and letting us know that he’s very interested in making the festival an annual event. Now, that may have just been the exuberance of the day talking, but I hope that when the dust settled and the checks were all written, the festival ended up being in the black. Because a smallish festival like this – with the high caliber of performers it featured – is a rare and special thing indeed. Whenever the next Transfigurations festival happens, I’ll be there.