Bill Kopp: You cut a couple singles with Mark Lindsay and Steve Alaimo as The Unknowns…

Keith Allison: Mark and I, of course, were signed to other labels, so that’s what we had to do. We couldn’t put our names on the record. We cut those at Radio Recorders in Santa Monica.

BK: The second Unknowns single was “Tighter.” And I think that is the best version; I think it even beats the (first) official Paul Revere and the Raiders version by a bit. 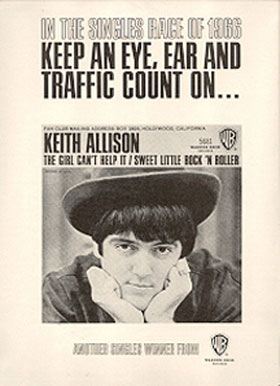 BK: You mention “Gone Movin’ On.” Several years ago when I interviewed Mark for the first time, I mentioned that there’s a really cool UK group version of it. The genre name didn’t exist at the time, but nowadays we’d call it freakbeat. It was by The Factory, the outfit that did “Path Through the Forest” that’s on Nuggets II: British Empire and Beyond. It’s an amazing version from 1968. Mark had never heard it; I sent him a copy.

KA: Really!? Here in Los Angeles we have a record store called Freakbeat. I bought a Raiders album there; it had Collage and Indian Reservation on one CD. An Australian import, I think. It was twenty, twenty-one bucks. I went up to the counter, and the guy looked at it, and he looked at me. And he said, “Are you on this?” I said, “Yeah. And it’s kinda sad when you gotta buy your own record.”

BK: Did he give you a discount?

KA: I don’t think so! [laughs] I also got a vinyl of Ringo‘s Y Not that I played on. I knew that they had made 10,000 units of it on vinyl; they had it in the store. I had seen it one other time; I went back and it was still there. So I thought, what the hell, and I bought it. I don’t even have a record player.

Well, a guy just gave me one recently, so I do have one. It’s one of those new ones where you can transfer to MP3, right into your phone or iPad. I was about to buy a [traditional] one, but he said, “Here! You need to have this.” I still haven’t plugged it in. I guess it works.

BK: It’s well known that you played on a number of Monkees recording dates. Are you on their version of “I Wanna Be Free,” one of the songs you cut as a solo artist? I know the Monkees recorded two very different versions of that song.

KA: No, I don’t think so. That’s Louie Sheton and Gerry McGee on that one. Y’know, some things I don’t know I played on, and some things I do know that I played on. I was surprised: they just did a reissue of The Birds, The Bees and the Monkees. I co-wrote “Annie’s Municipal Court” with Mike Nesmith. And I played guitar on it. And there were a bunch of cuts with Davy [Jones] and/or Micky [Dolenz], cuts that never were released before. And it listed me as playing guitar. “Oh my god!” I vaguely remember going to those dates in the studio with Davy, but I didn’t remember those songs at all. We cut ’em, and they were gone; we never heard ’em again. I was pleasantly surprised that I had played on that much of that album, though.

And I played on, uh, Circle…

BK: “Circle Sky”?! Wow…that’s one of their best tunes!

KA: Ah, good! [laughs] That was all cut around the same time as Birds. Nesmith was in the studio, and they were working on stuff, and that one ended up in the movie Head.

BK: On this new In Action collection, there’s a Columbia B-side called “Glitter and Gold.” It’s a really strong cut – unusually strong for a b-side – and I think an exemplar of what we now call “Sunshine Pop.”

KA: Terry Melcher found that one. He got Hal Blaine and, I think, Carol Kaye. I think.

BK: Well, if you’re not sure who played bass on a 60s pop track, say Carol Kaye, and you’ll probably be right.

KA: More often than not, I used Joe Osborne. I never ever hired Carol Kaye, although I did an awful lot of sessions with her. For Sonny and Cher; she was on a lot of sessions for them. Joe was a friend, and I got on with him. Not that there was anything wrong with Carol. 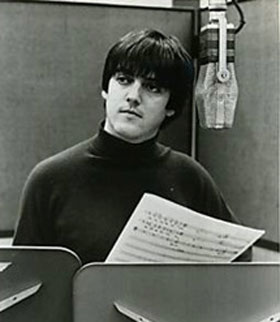 BK: And I believe you told me several years ago that he’s on bass on some later-period Raiders stuff as well…

KA: Yes, he is. Freddy [Weller] had moved back to Atlanta, and Smitty was up in Carmel, and so sometimes it was just Mark and me in town. Now, in the studio, when I was in the group, I nearly always played bass on everything. And guitars. But sometimes, I’d play guitar, Joe would play bass, and Jim Gordon would play drums. We got really tight as a unit. We’d set up in a circle, facing each other.

On [late-period Raiders singles] “Seaboard Line Boogie,” “Song Seller,” all that stuff. The basic tracks were cut with that trio. “Prince of Peace,” “The Shape I’m In.”

BK: The Raiders version of Laura Nyro‘s “Save the Country”?

KA: The way we used to record, when I joined The Raiders, we’d work on getting a drum sound. And Freddy and I would play acoustic guitars, facing each other. Close to the drums. We were playing as a trio: two guitars, drums. That’s it. We did it with headphones on. And if we needed it for reference, Mark would sing into a mic someplace just so we’d know where we were in the song.

And then Mark would put on his lead vocal at the end. So he had a full-on track to work with. He liked to do it by himself. Sometimes we would help him. But he liked singing with everything else done, so it was like doing a show.

Collage and the whole Hard and Heavy (With Marshmallow) albums were done exactly like that. It might be a bizarre-sounding way to do it, but it worked for us. Because if you’ve got it right with two acoustic guitars and drums, you have a track.

Sometimes we’d cut a track with me on bass, Freddy on guitar and Junior [Joe Corerro Jr.] on drums. I think The Raiders’ “Birds of a Feather” was cut that way. And a few others.

When I started recording, [laughs] you had to do everything live! It was mono. When I first started, it was 1959 or so. You’d be scared to death, because you had to get it right. I think Elvis did thirty-six, thirty-eight takes of “Hound Dog” before they got one they liked.