Calling singer-songwriter-actor-musician Keith Allison a Zelig of rock music is a bit wide of the mark, but the Texas-born Allison does seem to have shown up at key points in the pop music scene of the 1960s. Originally a member of the post-Buddy Holly lineup of The Crickets, he went on to fame as a cast member of Where the Action Is, co-starring with Paul Revere and the Raiders. He’d play on a number of Raiders studio sessions, and would eventually become a key member of that group, while still doing plenty of session work for others. After his long tenure with The Raiders (1968-1975) ended, he went on to do more music work, and did more film and television acting. Recently he’s appeared on albums by his pal Ringo Starr, and he’s part of a regular gig with Waddy Wachtel in Los Angeles. One of his most notable recent appearances was joining the band at the Wild Honey benefit for autism; he did a cover of The Beatles‘ “Got to Get You Into My Life” with former Wings guitarist Laurence Juber.

Allison released one album back in his Where the Action Is days, the now-rare In Action. Real Gone Music recently reissued that eleven-song album on CD, appending it with a dozen bonus rare and/or unreleased cuts.

I had spoken to Allison before, a few years ago, in connection with a cover story I did on The Raiders for UK magazine Shindig! Then as now, I found him to have an amazing memory for details of the long-distant past, and he was open and engaging about it all. I proudly present this five-part conversation with Keith Allison – bk 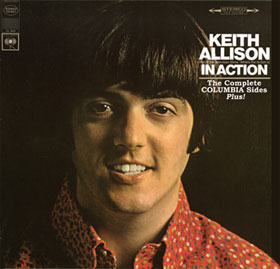 Bill Kopp: Several of the cuts on the In Action album – “Louise” and “Good Thing,” in particular) feature the same backing tracks as The Raiders‘ versions, and I have a couple of questions about that. First, did you play on those sessions?

Keith Allison: On “Good Thing,” I put piano on that. A driving thing, a rhythm piano part. You can hear it. With a bunch of glisses [glassandi]. And I sang it. On “Louise…I might have put an electric rhythm guitar part on it. But basically, I didn’t change them much. They didn’t need much; perfect like they were. They’re a little different mix. I liked both the songs at that time, so I went with those. “Louise” was a single for me.

BK: Do you know if your versions or the Raiders ones were released first?

KA: The Raiders’ were. “Good Thing” had already been a hit, and “Louise” was an album cut. I was looking for something to pay homage to The Raiders; we were so close anyway. I talked to [Paul] Revere, and I said, “Look, we’re finishing up this album. Instead of me cutting these tracks from scratch, taking all the time and money to do that, why don’t I just use your tracks, and change ’em a little bit?” Revere said, “Let me think about it a little bit.” And he called me back and said, “Go ahead.”

Terry Melcher had produced The Raiders tracks. We were on the same label, in the same studio. So they gave us access to those tracks. So we took the masters, ran off duplicate copies of them, and pulled Mark [Lindsay]’s vocal off.

BK: Not long ago there was a thread on an internet discussion board, about the Raiders playing live. One commenter says he saw the band in the mid 60s before you were a member, but in the period when you would tour and do a set with them backing you. He insists he saw you in the wings with a guitar, playing second guitar behind Drake Levin (or possibly Jim “Harpo” Valley). Can you confirm, deny or otherwise comment on that?

KA: Right after Harpo left the group, Drake came back in. And Phil Volk was on bass. I was on the tour anyway. And there had been a bunch of songs recorded after Drake had gone into the Army [National Guard] and came back out. So he hadn’t been working as a member of the group, but since he was familiar with the early tunes and so forth, he put on the costume and did it. He and Phil knew all the steps. So it was just like the group before Harpo.

But the songs had gotten more complicated guitar-wise. So I said, “Why don’t I play with you guys, but not onstage?” A couple of times, though, I played from behind the Super Beatle amps, next to the drum riser! But it didn’t work out, because I couldn’t hear what I was playing. And then you tend to play too loud. Someone said, “Yeah, it was good, but God! Keith was loud.” So we quit doing that. But yes, I did that a few times. Only to fill in. But only until Drake became more familiar with the songs. That’s my memory of it, anyway.

Melcher brought me in the studio…we started tracking “Hungry,” and then Phil got all bent out of shape. Drake wasn’t there; he was someplace else. Phil got upset because it wasn’t “the group” playing on all the tracks. I don’t think Smitty [drummer Michael Smith] was there either. But we spent several hours working on “Hungry,” and Phil got really despondent about it. There was a version of the song with me, but I think they re-cut it later on. That was one of the first times I played on a Raiders track. And then I played on “Ups and Downs,” and I played on “Him Or Me: What’s it Gonna Be?” 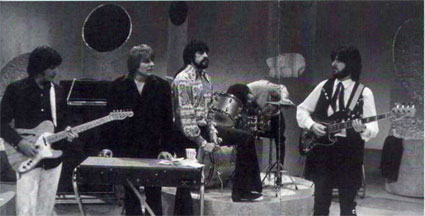 BK: It’s probably one of those things where, at this late date, nobody’s totally sure who’s on the released version…

KA: Yeah. They’d cut something, and then they’d go out of town. And Terry would go through the tapes, pull stuff off, put stuff on. That was a common thing. I think at one point – it might have even been “Hungry” – they pulled Smitty’s drums off and put Hal Blaine on. Which brightened it up and changed it and all that. Melcher would say, “I cannot wait for you guys to be in the studio.” He wanted to be cutting tracks while they were out of town. And that really upset some of ’em, because they really wanted to play on everything. Which I can understand.

But by the same token, when you cut such good tracks with The Wrecking Crew, who cares?

BK: Good point. I think of the example of Brian Wilson around the time of Pet Sounds. The Beach Boys were on tour – briefly even with Glen Campbell in Brian’s place – and they would show up in the studio and just overdub their vocal parts onto the tracks Brian had cut without them.

KA: They did that way before Pet Sounds. Glen’s playing on “Little Deuce Coupe” and “I Get Around.” He’s playing on “Fun Fun Fun.” He’s playing the twelve-string on “Dance Dance Dance.” Brian knew what he liked, and the people that he wanted. He used Carol Kaye on bass, and Glen on guitar, and Hal on drums. That was the rhythm section. And then he would build and stack it all. In fact, he would often start all the background vocals before they [Carl Wilson, Al Jardine, Dennis Wilson, Mike Love etc.] got there.

I went into the studio at Columbia one time. Columbia had eight-track machines – most of the studios did not – and I was walking through Studio A, and Brian was stacking vocals. I guess he was working on “Heroes and Villains.”

KA: I said to him, “Man! Are you doing this all?” He said, “You wanna sing on it?” I said yeah, so I did “oohs and ahhs” with him for about two hours. He would go on and on and on; he would record two or three tracks, combine them to one, erase all those, and then build up more. But I got to sing with him just because I happened to be walking through the studio. Anybody who came through, they got put to work. Usually.