Ask Me Some Questions: The Graham Parker Interview, Part 2 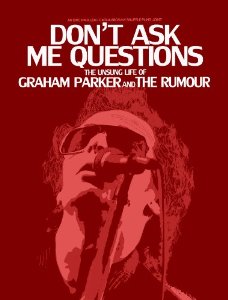 Bill Kopp: In the new documentary film Don’t Ask Me Questions, you come off very authentically as a sensitive, soft-spoken individual. But back in the 80s, like many people, I think, I was convinced of your reputation as an angry, sort of perhaps even confrontational artist. How and why do you think that reputation developed?

Graham Parker: Well [laughs], there’s some brilliant stuff from Bruce Springsteen on that, about my material. He said that there was always this “caustic sound.” And that’s true. Because when I started, I’d had pretty much zero experience. I’d written these songs, and was totally green to the whole process. And I found myself instantly with a record deal. I had found the right people, like David Robinson, who managed me and then got all those great musicians behind me. And once that had happened, there was a record deal. Out of the blue, really.

So my style was already very aggressive. That just seemed to be the way I was writing and singing at that point in my life, in my early twenties leading up to 1975 when we started. I developed that style of singing, and I didn’t really know anything else.

It’s still there in my vocals, but it’s softened a lot. Because I enjoy actually singing now. I think it’s much more suitable for the kind of songs I write, and probably would have been more suitable in the first place. But there again, hindsight et cetera.

You can’t help but hear it: “This guy is really pissed off!” And [laughs] I did it on love songs as well. It was a style; I just wanted to be harder and louder and nastier. Remember, in that part of the 70s, there wasn’t any punk rock or any of that, and I wanted to sort of change what was going on. And somehow I found this extremely aggressive vocal style, and stuck to it.

So it’s understandable that people have that impression. And that’s okay.

BK: You’re know for your heartfelt lyrics; A Graham Parker song is never a simple moon-june love ditty. But many of those deeply heartfelt songs – especially from the period during which you worked with The Rumour – were written by a man in his 20s. When you sing those now, do the lyrics still resonate with you, or do you feel that since you’re singing the words of a man less than half your age that they sentiments are somehow alien or even naïve?

GP: Ah, that’s an interesting point. It doesn’t strike me that they’re out-of-date. It doesn’t strike me that way at all. Because obviously – with or without The Rumour – I do play those songs from my early-early career. There’s a few periods where I might be doing shows where I’m really concentrating on a newer period, but there’s always old ones. Especially from Howling Wind; they seem fairly universal to me.

There are some songs where I think, “Nah, I don’t really want to do that.” They’re not quite right; they don’t quite sit right for me, now. But for the most part, I don’t listen to them and think, “I don’t understand this.” I know what I was thinking. They all make sense. Some of them I wouldn’t write now, but there’s nothing alien to me there.

BK: There’s a belief among some that conflict, turmoil and distress are somehow essential ingredients for artists to create enduring works. And while I’d say that that “Mercury Poisoning” is one of my favorite of your tracks, I’m not sure I buy the argument that – if you’ll pardon the horrible metaphor – you have to have sand in the oyster to get the pearl. What do you think?

GP: “Mercury Poisoning,” for instance, is a joke. When an artist starts complaining about his record company in his songs, you should start worrying. It’s not a good sign; it’s a sign of running out of ideas.

My manager was much angrier than me, and he told me to write an entire album of hate-songs. That’s literally how it came about! I wrote one, and said, “I’ve said it all in this song, Dave. That’s enough. Okay?” So I stopped there, thankfully, and wrote [the songs for] Squeezing Out Sparks. A much better idea, really; let’s face it.

People never, ever seem to get it. But the first album had songs like “Between You and Me” on it. And “Gypsy Blood,” though that’s a song I don’t like now; it’s a sort of maudlin, romantic song. But they don’t remember that, and so they think that “Mercury Poisoning” sums it all up. “New York Shuffle” is another one. And that’s really a very, very small part of what I do. But again, I would even do a love song back in the 70s as if I were trying to hurt somebody. And it took a long time for me to temper that with some actual singing.