Okay, not everyone likes Christmas. Some are turned off by the commercial character of a day that is supposedly to commemorate the central figure of Christianity (a child who – most Biblical scholars agree – was born in the spring, by the way). Others dislike it for the music.

I don’t subscribe to either of those viewpoints: I like Christmas. A lot. It’s not my favorite holiday; that would be Halloween (for the costumes) or Thanksgiving (for the fellowship and food). But I do enjoy the secular focus upon taking time to share gifts with loved ones. Most years, I even set up that most pagan of Christmas symbols, my fiber-optic lit artificial Christmas tree, festooned with construction paper-and macaroni ornaments my now-adult kids made when they were tots.

And I like the music. Yes, really. I know that certain songs are overplayed, and people get sick of them by the Sunday after Thanksgiving (if not sooner). And I am no fan of Band Aid‘s “Do they Know it’s Christmas” nor Wham‘s treacly “Last Christmas.” And though I am a lifelong Paul McCartney acolyte, I too think “Wonderful Christmastime” is a stinker.

My favorites, though, include Roy Wood‘s perennial UK favorite, “I Wish it Could Be Christmas Everyday,” John and Yoko‘s “Happy Xmas (War is Over),” and the still officially unreleased full version of The Beatles‘ (admittedly repetitive) “Christmas Time is Here Again.” And there’s a special place in my heart for the instrumental genius of Dave Amels (Reigning Sound) and The Smithereens‘ Dennis Diken (and friends) as found on Husky Team‘s delightful Christmas in Memphis. Find that one if you possibly can; it’s a gem, and fun in any season).

I mention all this not to fill space but to give you the context for the point of view I bring to the capsule reviews of this baker’s half-dozen of holiday season offerings. In short, I enjoy Christmas music as a style enough to appreciate the fine examples of it. But that doesn’t mean that I’ll still be playing any of it come Boxing Day; at that point it all (with the exception of Husky Team) goes back on the shelf until next year. But in the meantime… 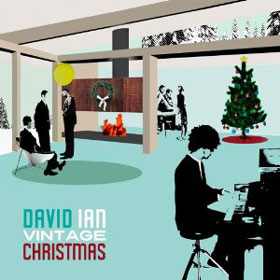 David Ian – Vintage Christmas Wonderland
If you like your holiday music in a classic vibe – think Frank Sinatra, Julie London and Mel Torme rather than Mitch Miller – then you’ll find plenty to like on this five-song EP. Ian on subtle, jazzy piano is joined by an upright bassist and drummer (mostly on brushes) for this low-key affair that also features tasteful string work and (on three cuts) an assortment of smooth male and female vocalists. Ian goes for a Vince Guaraldi vibe (also see below) on an instrumental reading of “O Little Town of Bethlehem” in this all-standards offering. Brief but fun. 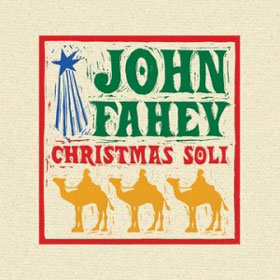 John Fahey – Christmas Soli
What little I knew about Fahey suggested that his music would be a stiff affair. And maybe a bit pretentious: “Soli?” In my neighborhood we call ’em solos. But this set – compiled from among the readings of public-domain Christmas songs found on four Fahey albums – is filled with heartfelt yet precise fingerstyle acoustic guitar work. A couple of the songs are not strictly solo pieces (er, soli) as they feature guitarist Terry Robb alongside Fahey. But for those who enjoy this style of music, this is a fine collection of traditional holiday songs within a folk instrumental idiom. 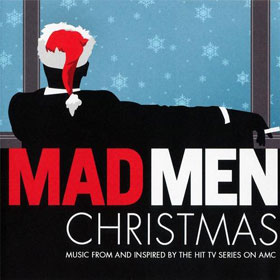 Various – Mad Men Christmas
Conceptually, this one’s a bit of a head-scratcher. The album’s subtitle – “Music From and Inspired By the Hit TV Series on AMC” (emphasis mine) – gives the compilers some breathing room, insofar as a a few of the twelve tracks are contemporary tunes. Those are by the likes of Jessica Paré (the totally-not about-the-holidays instrumental “Zou Bisou Bisou,” which sounds more like Pizzicato Five than anything else) and Nellie McKay‘s more thematically relevant “Christmas Waltz.” But ringers from Tony Bennett and Rosemary Clooney go some distance toward conjuring that pre-Beatles 60s vibe. Available exclusively at Target. 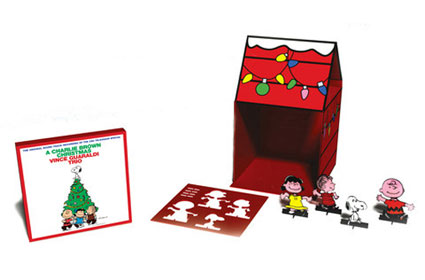 Vince Guaraldi – A Charlie Brown Christmas
In 2012, Concord re-re-released this album with unreleased tracks; this favorite contains the jazz songs that people who don’t like jazz, like. Disliking this will earn you the title “Scrooge,” as it’s delightful and – at least for members of a certain generation – evocative of pleasant childhood memories gathered ’round the TV set. The Library of Congress calls it a “culturally, historically, or aesthetically important” sound recording. Now in 2013, Concord has yet again reissued this set, this time making the digipak into a clever die-cut piece than can be manipulated into the three-dimensional shape of Snoopy’s doghouse. 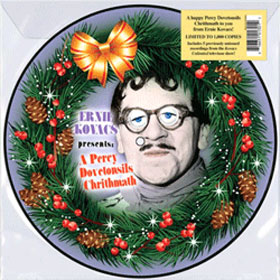 Ernie Kovacs – Presents a Percy Dovetonsils Chrithmath
Televisionary Ernie Kovacs created a simpering character called Percy Dovetonsils, unknowingly presaging the public personae of Charles Nelson Reilly and Paul Lynde by more than a decade (though Kovacs’ character was more erudite and subtle). This limited-edition 10″ vinyl picture disc is a swell companion to the pink vinyl album from 2012. True, the humor is dated, but get past that and this is a hoot. One track from the …thpeaks album plus five unreleased poetry vignettes from the Kovacs Unlimited TV show make up this set. The jokes run right through the printed track lithting and liner noteth. Thilly. 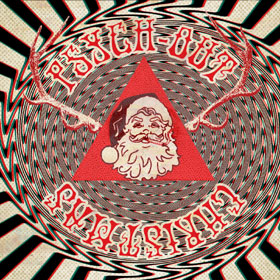 Various – Psych-Out Christmas
Where Cleopatra Records are concerned, Santa’s gift sack is best described as a grab bag. How else to characterize this mishmash of covers and new material from the past and present? Hot modern psych band Elephant Stone are on hand with a dodgy cover of The Beatles‘ “Christmas Time is Here Again.” The Fuzztones rewrite “Farmer John” as “Santa Claus.” Iggy Pop ruins “White Christmas.” Other current acts turn in psych-inflected readings of holiday classics, but what, pray tell, does The Zombies classic “Time of the Season” have to do with this season? Perhaps Sons of Hippies know. Still, fun. 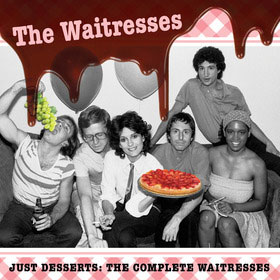 Special mention:
The Waitresses – Just Desserts: The Complete Waitresses
Not a Christmas album at all, this new 2CD collection from Omnivore Recordings does include the group’s “Christmas Wrapping,” originally from their 1982 EP I Could Rule the World If I Could Only Get the Parts. Patty Donahue‘s sing-song delivery was and remains an acquired taste (one to which I have found myself largely immune) but the arty arrangements are outstanding, in a distaff Roxy Music sort of way. Art rock and white-boy reggae are filtered through a new wave sensibility. And “Christmas Wrapping” injects the holiday season with a much-needed bit of levity and irreverence, 80s style.

Happy Holidays. And there ain’t no “war on Christmas,” despite what the FOX propagandists might have their mindless followers believe.